Home > About Our City > Tokyo's History, Geography, and Population > Population of Tokyo

As of October 1, 2020, the population of Tokyo is estimated to be 14.065 million, or about 11.1% of Japan's total population, and it has the largest population among all the 47 prefectures.

At 2,194 square kilometers, the area of Tokyo is 0.6% of the total area of Japan. With a population density of 6,410 persons per square kilometer, Tokyo is the most densely populated prefecture in Japan.

Tokyo has 7.219 million households, with an average 1.95 persons per household. The number of foreign residents according to the basic resident register is 539,000 as of October 1, 2020.

Trends in Population of Tokyo

The population migration between Tokyo and other prefectures in 2019 showed 464,000 persons moving into Tokyo while 383,000 persons moved out, for a net social increase of 81,000 persons.

With the exception of 1984 and 1985, there was a prevailing trend of out-migration exceeding in-migration since 1967, until a net social increase was seen for the first time in 12 years in 1997. 2019 again showed a net increase.

Looking at the migration between Tokyo and the three adjacent prefectures (Saitama, Chiba, and Kanagawa prefectures), 210,000 people came into Tokyo while 212,000 moved out.

The percentage of aged persons exceeded the United Nations standard of 14% for an “aged society” in 1998, and Tokyo is now a “super-aged society,” with senior citizens making up 21% or more of the population.

According to the National Census of 2015, when employed persons were viewed by the three industrial groups, 23,000 persons (0.4%) were employed in the primary industry of agriculture, forestry, and fisheries; 0.898 million (15.3%) in the secondary industry of mining, construction, and manufacturing; and 4.226 million (72.1%) in the tertiary industry of commerce, transportation, communication, and services.

According to the National Census of 2015, when employed persons were viewed by the four employment groups, 23,000 persons (0.4%) were employed in agriculture, forestry, and fisheries; 1.008 million (17.2%) in manufacturing and transportation-related occupations; 1.501 million (25.6%) in sales and services; and 2.662 million (45.4%) in clerical, technical, and management occupations.

Changes in the metropolis since 1965 show that in the period up to 2015, while the nighttime population increased by 2.646 million (24.3%), the daytime population had a much greater increase of 4.169 million (35.5%), bringing about a large imbalance.

As the denominator (total population) from 1990 to 2005 used to calculate the percentages includes persons of unknown age, totals do not reach 100%.

Trends in Breakdown of Employed Persons by Three Industry Sectors 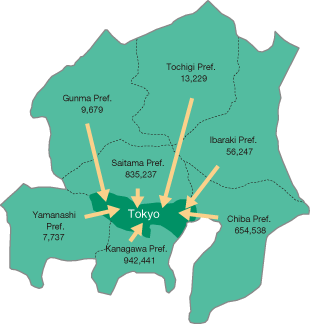 Proportion of Workers in Tokyo Metropolis by Place of Residence (2015) 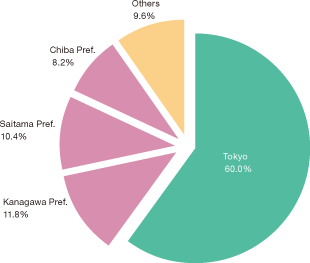