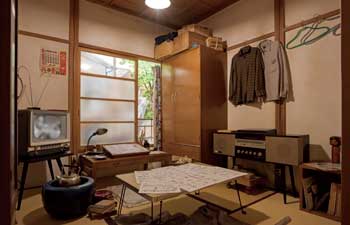 A recreation of Yokota Tokuo’s room. It is changed according to the season.

If the name “Tokiwaso” rings a bell as the “holy place of manga,” you can pride yourself on being a manga trivia buff. In the 50s to early 60s, it was the apartment building where a number of manga artists who would go on to achieve fame lived at the start of their careers, including Tezuka Osamu, the creator of Astro Boy, and Akatsuka Fujio, known for writing the popular series Osomatsu-kun. Although the building was demolished in 1982 due to its age, it has been faithfully recreated within Minami-Nagasaki Hanasaki Park, not far from the original site. In July this year, it was opened as a museum.

As you enter the museum, take your shoes off at the hallway and walk up the stairs. They creak with every step, but this is in fact part of the experience. There are other subtle touches that give the impression of aging, such as scratches on walls and grime on the outer walls, designed to show Tokiwaso as it would have looked around 10 years from its construction.

Reach the top of the stairs and you will see a shared kitchen, where traces of activity make it seem like someone was just there eating and drinking. The attention to detail can be noted in the ramen bowl that was actually used back in the day at a Chinese restaurant that the residents used to frequent.

Rooms in Tokiwa-so were around 7m2 and included a closet, with a monthly rent of 3,000 yen. At the time, a cup of coffee cost around 50 yen. With many manga artists coming and going from the building, including Fujiko F. Fujio, Fujiko Fujio ○A and Ishinomori Shotaro, there was an atmosphere of mutual encouragement that drove the artists to work hard to improve their skills. In addition to rooms that display materials or share anecdotes, there are also rooms that reproduce the manga artists’ lifestyles. The television plays advertisements from the period, and on the desks you can see half-finished manga manuscripts. Look out for the various small details that have been meticulously included in the rooms. 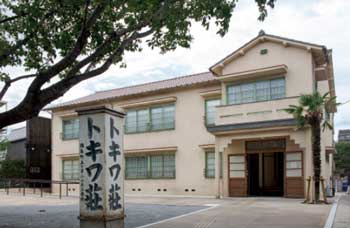 The museum’s exterior replicates the original, even down to the Chusan palm tree by the entrance