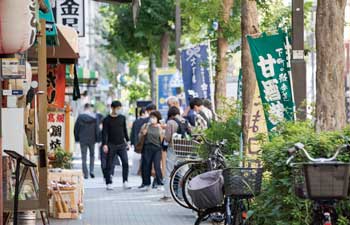 People come and go on Amazake Yokocho street
Download this photo as wallpaper from here.

Ningyocho is located near Nihombashi. Its name, Ningyocho (doll town), came from the fact that, in the Edo period (1603-1867), puppet shows, a popular form of entertainment for the masses, were frequently performed, and many craftsman and merchants in the doll industry lived in this area.
The road running north and south from Ningyocho Station is Ningyocho-dori Avenue. Flanking the bustling thoroughfare are business establishments including Japanese, Western, and Chinese restaurants, long-established ningyo-yaki cake shops, and stores selling traditional Japanese crafts such as pottery. Although it is an urbanized neighborhood with building after building, peek into a side street to find beautiful old structures and small shrines. You can see a reflection of the changing times in this townscape where old and new co-exist.
If the time is right, check out the two Karakuri Yagura clock towers standing on opposite sides of Ningyocho-dori Avenue. Enjoy the dolls that mechanically move at the hour from 11 a.m. to 7 p.m. The motif of the first clock tower is Edo Rakugo. The curtains open and the small figurine of a rakugo storyteller begins explaining the origin of Ningyocho, while a carpenter, messenger, and other dolls appear. The revolving dolls depict how the people of the Edo period lived. The other clock tower is modeled after a fire tower. While the Edo firefighters sing kiyari, their work chants, the other firefighter dolls display their ladder-climbing and other skills.
Turn the corner to find Amazake Yokocho street. In the early Meiji era (1868-1912), there was an amazake (sweet sake) shop at the entrance of this small street that extends for approximately 400 meters to the Meiji-za Theatre. Hence, the name Amazake Yokocho. The street is lined with various restaurants, as well as Japanese sweets and amazake shops, delis, and stores selling Japanese crafts, and has a nostalgic atmosphere not seen on Ningyocho-dori Ave. After passing through Amazake Yokocho street, take a little break in Hamacho Park. The park is a popular resting spot for locals, with many people coming to relax on the benches on this spacious park built on the former garden site of the Hosokawa clan of Higo province. Facing the Sumida River, Hamacho Park is also recommended for a nice stroll along the waterfront with a view of Tokyo Skytree.
Alight at Ningyocho Station on the Tokyo Metro Hibiya Line or Toei Asakusa Line. 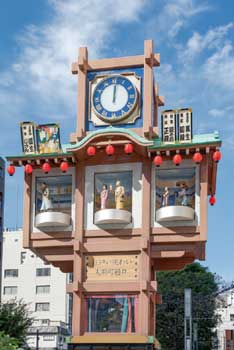 ※This article is also available in other languages. (日本語／English／中文／한국어)