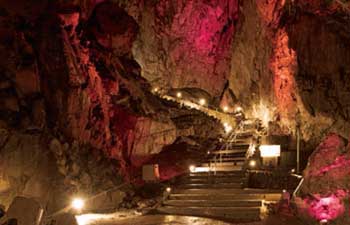 Near Shide-no-yama, an enormous underground space
Download this photo as wallpaper from here.

What looks like a mammoth temple spread underground is Nippara Shonyudo, a limestone cave formed over a long period of time. Located in Nippara in the town of Okutama, this limestone creation is a trove of natural treasures, and the largest cave complex in the Kanto region. In recognition of its value as a precious natural asset, Nippara Shonyudo has been designated a natural monument of Tokyo.
From JR Okutama Station, take the bus bound for Shonyudo, and alight at the final stop. The ride is about 35 minutes. Cross the bridge, and follow the road along the river, until you see the entrance to the Nippara Shonyudo cave on your right. Pay the admission fee at the ticket counter. Entering the cavern, you will feel a change in temperature. The cave’s interior temperature is 11 degrees Celsius throughout the year. This makes the inside of the cave cool in the summer and warm in the winter. Follow the directional signs provided throughout the cave’s passages. You will experience the thrill of a cave explorer.
The cave extends to a total length of about 1,300 meters and contains a plethora of spots worth seeing. Near the middle of the cave, you will find Suikinkutsu (water koto cave) where the effect of water dripping into a pot buried in the ground creates a mystical sound. Listen closely to the musical tones of nature. Shide-no-yama (the mountain of the dead), about 30 meters tall, is the most open space in the whole cavern. Illuminated in rainbow colors, a fantastical scene spreads out before your eyes.
It is said that it requires some 70 years for stalactites in caverns to grow a mere one centimeter. If you want to see these icicle-like formations hanging from the cave roof, venture into Shindo (new cave). But don’t push yourself too hard because, to reach this part of the cave, you have to climb a little more than 170 steps that are slippery and steep.
If you walk slowly, you can see the entire site in about an hour. Coming out of the cave after the tour, you will even feel like you have just returned to the modern world. Get warm by slurping up soba or udon noodles served in the shop next door. 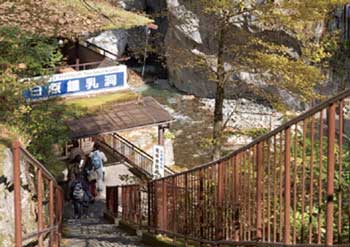 The entrance to the Shonyudo cave

Take the bus from Bus Stop 1 at Okutama Station on the JR Ome Line. Nippara Shonyudo is a 3-minute walk from Shonyudo bus stop. But on weekends and public holidays, when the bus only goes to Higashi Nippara, it takes 25 minutes on foot to get there.
[Nippara Shonyudo]
Phone: 0428-83-8491(Japanese only) Open from 9:00 a.m. to 4:30 p.m. (9:00 a.m. to 5:00 p.m. from April through November). Closed on the year-end and New Year holidays. 800 yen for adults (including high school students). Website(External link) (in Japanese)

※This article is also available in other languages. (日本語／English／中文／한국어)