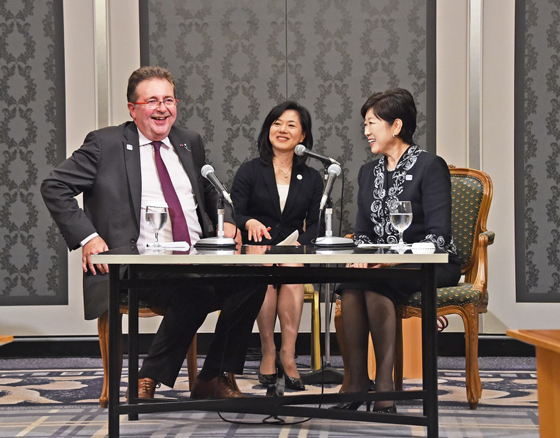 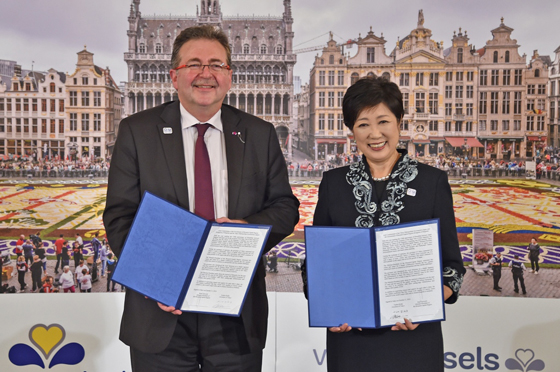 On Tuesday, October 11, Governor Koike met with Mr. Rudi Vervoort, Minister-President of the Brussels-Capital Region, at a Tokyo hotel.

Mentioning that this year is the 150th anniversary of friendship between Japan and Belgium, the governor said she would like to celebrate the 150 years of history the two countries have shared. She voiced her appreciation of the visit of the King and Queen of Belgium at this important juncture in the countries’ long friendship. Noting that the anniversary year had been marked by flower carpet events held in Tokyo in May and in Brussels in August, the governor said she hoped that through flowers, the relationship between Japan and Belgium would grow even deeper. As the first female governor of Tokyo, she said she wished to make it, like Brussels, a capital which takes its strength from being a diverse city that embraces all citizens equally.

Mr. Vervoort said he hoped that relations between Japan and Belgium would grow even deeper. He noted that Governor Koike was not only the first governor of Tokyo, but had also been the first female defense minister in Japan, and agreed that the issue of gender equality was extremely important. He said that women must be able to participate fully in the world of politics. Mr. Vervoort added that the two capitals of Tokyo and Brussels face similar challenges and that he would like to work together to address them.