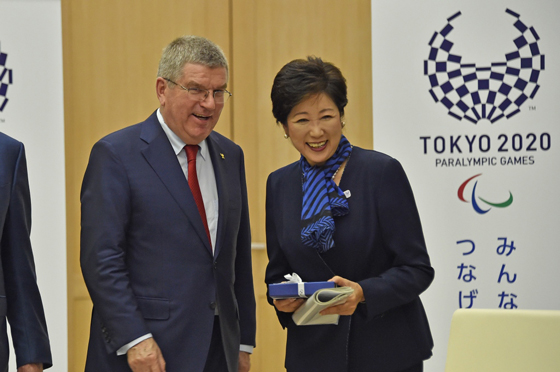 The governor said, “As the Governor of Tokyo, I will work with a sense of responsibility to make the Tokyo 2020 Olympic and Paralympic Games a success.” Governor Koike added that the TMG was studying the proposal, made by the Olympic and Paralympic Investigation Team, that the venues plans be reviewed, while taking into consideration the Games’ legacy, the cost-effectiveness of venue construction, and the Games’ contribution to the reconstruction of the areas hit by the 2011 earthquake and tsunami.

President Bach said that the IOC hoped to closely work with the TMG while trying to avoid “mottainai (Japanese word meaning ‘wasteful’)” and to together pursue the best way to operate the Games. He then proposed that the TMG, the organising committee, Japan’s national government, and the IOC have four-party talks.

Governor Koike replied, “I hope the four-party talks will be held in a way that ensures transparency to the people of Tokyo and Japan.”