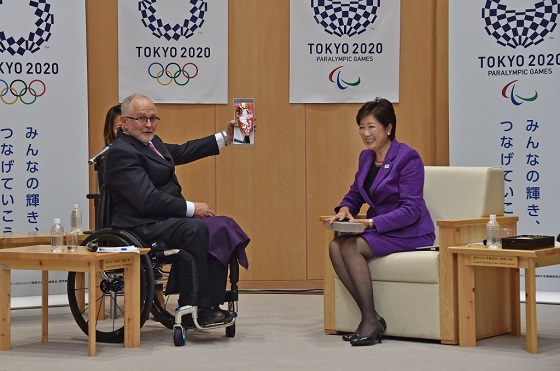 The governor said, "Over the next four years, I want to steadily make preparations so that Tokyo 2020 Paralympic Games are spectacular. I also learned that we need to implement the barrier-free and universal design concepts. At the same time, I hope all of the people of Tokyo and Japan will learn about Paralympic events." The governor went on to introduce efforts, including the formation of a boccia team by employees of the Tokyo Metropolitan Government (TMG). The TMG also promotes participation in the sport to other organizations and companies. Through boccia being widely played, if disabled sports "are enjoyed by all—those without disabilities, children, and adults—I am sure that the 2020 Paralympic Games will be an amazing event," explained the governor.

At the meeting, President Craven said that he could feel everyone's passion for the Paralympics. He said that the commitment to implementing universal design was something that would benefit everyone, and that he looked forward to seeing universal design befitting the 21st century in Tokyo. President Craven also touched on the Olympic and Paralympic flags tour currently underway saying, "This is a wonderful method of promotion. Through the organization of a tour like this, we can also clearly receive your message."