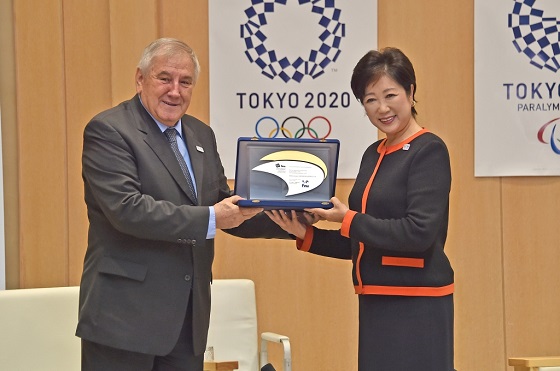 Stating that the people of Tokyo and Japan are very happy about the excellent achievements of the Japanese swimmers, Governor Koike said, "As the governor of the host city, I also wish to strive to have these achievememnts continue on to the Tokyo 2020 Games. With the spirit of putting the interests of the athletes first, I want to make the Games a wonderful event that gains the understanding of the people of Tokyo and the taxpayers." With regard to the Aquatics Centre, she explained that while studying matters such as downsizing costs and operating costs, "I will devote my utmost efforts to ensure that we can pleasantly welcome the superb swimmers of the world to Tokyo 2020."

Executive Director Marculescu mentioned that he competed at the Tokyo 1964 Olympics, which was the greatest, and said, "Tokyo 2020 will also be, without  question, a wonderful Games." He went on to say that at the London 2012 Games, swimming ranked top in television ratings, and that fans, including young supporters, are on the increase. At Tokyo 2020, swimming "will, without fail, be the leading presence in Olympic sports. I understand that you have to spend the budget wisely. For the Games, you must prepare the best venues and facilities," directing attention to the necessity of the Aquatics Centre.