Transport and Communications Minister of Finland visits the governor 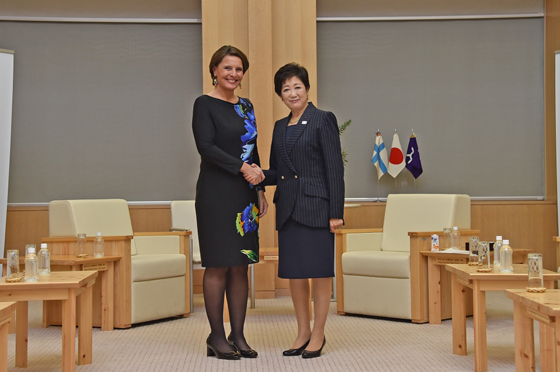 On Monday, November 14, Governor Koike met with Finland’s Minister of Transport and Communications Anne Berner at the Tokyo Metropolitan Government.

At the start of the meeting, Governor Koike expressed her gratitude for the liquid baby formula that was sent from Finland in the wake of the April earthquake in Kumamoto Prefecture. She also said, referring to the fact that there is a high level of transparency in politics and government administration in northern European countries, “I am paying particular attention to Finland’s strong competitiveness in information and communications technology. IT, among other factors, facilitates information disclosure.” She then added, “In Japan, the shortage of day care centers is a serious problem for working mothers. We are learning many new things from Finland, which places great emphasis on the education of children.”

Minister Berner expressed her desire to cooperate with the governor, especially in the fields of digitization, the Internet, and the Internet of Things (IoT). She said that women’s social status and the education of children were important in Finland as well and that she hoped that the two countries would be able to share the best approaches in these areas. Minister Berner also told the governor that it was essential to get everyone involved and to pass on the efforts to the next generation.