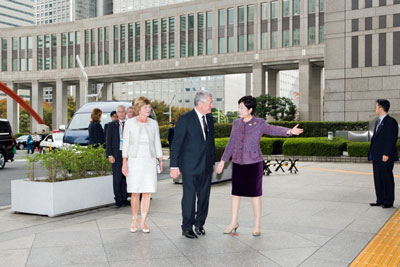 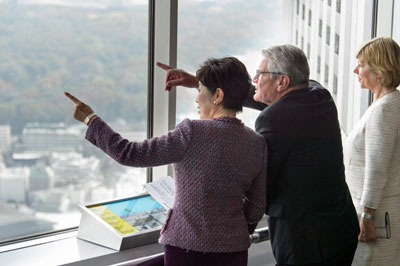 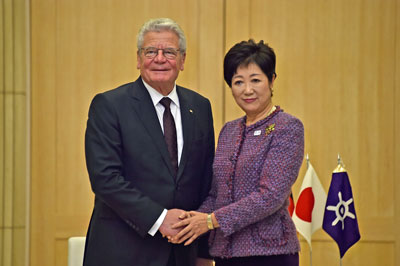 The governor greeted President Gauck upon his arrival at the Tokyo Metropolitan Government, and led him to the observation deck on the 45th floor of the building's southern tower.

At the meeting that followed, Governor Koike told the president that Japan and Germany were very important partners and had ties in various fields, including the friendship city relationship between Tokyo and Berlin. She said, "Tokyo has a lot to learn from Germany, such as issues related to the environment, women's active role in society, and work style. On our part, Tokyo can also share experiences that could be of help to Germany." She added, "I am looking forward to deepening our relations in the area of sports as well," informing him that she is working closely with International Olympic Committee (IOC) President Thomas Bach, who is also from Germany, in preparing for the Tokyo 2020 Olympic and Paralympic Games, and that the Rugby World Cup 2019 will be held in Japan.

Speaking of his surprise at how clean the air in Tokyo was, despite the fact that it is such a large city, President Gauck expressed his respect toward Japan's efforts to protect the environment as well as its economic power. Referring to the fact that he was familiar with the difficulty of maintaining a good environment in a big city, he said that environmental protection was a well-suited area in which governments can learn from each other and that it was important not just to compete but to also cooperate. The president also said that Governor Koike, as a female governor of a major metropolis, was a role model for many Japanese women, and also a symbol of women active in society.