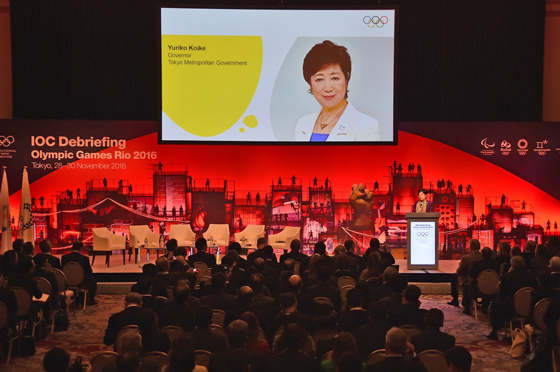 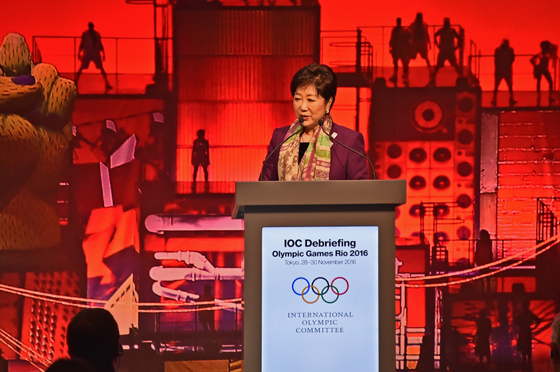 On Monday, November 28, the Rio 2016 Debriefing kicked off a three-day program of events with Governor Koike attending the first day’s opening session.

The governor opened the meeting, saying, “At the closing ceremonies for both the Olympic and Paralympic Games, as the whole world watched, I took the two flags handed over by Mayor Paes, firmly embracing the feeling that it was now, finally, Tokyo’s turn.” The governor went on to say that while in Rio, she also learned about the roles the host city must play in areas such as the construction of facilities and transportation infrastructure, and about handling various issues. In reference to one of Rio’s initiatives to recycle materials used in the construction of temporary venues after the Games to build elementary schools, she said, “The word ‘sustainability’ is crucial. It is what the IOC and the countries and cities of the world need most. That sustainability was achieved by everyone affiliated with the Rio Games. In Tokyo as well, I hope to use Rio’s initiative as a reference to incorporate the mottainai concept into our staging of the Games, and strongly promote this message to the world as a model of a sustainable city.” The governor then added, “We will prepare an environment that enables athletes to concentrate on their sport. To that end as well, I hope that you will share your experience and knowledge related to the Games with us, and pass the baton on to Tokyo.”

The three-day debriefing will include sessions titled, “Vision as a Tool to Succeed,” “Strategic Approach for a Successful Paralympic Games,” and “Showcasing Sport & Athletes.”