Governor meets with the Premier of Ontario 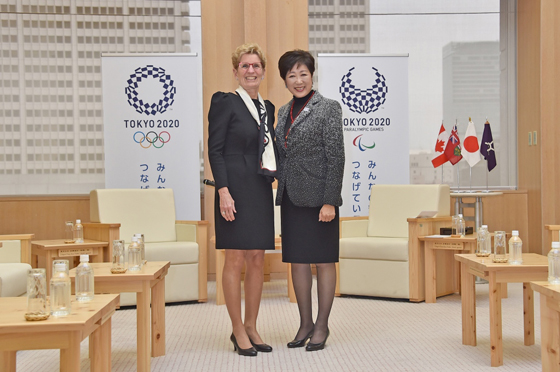 At the meeting, the governor said, “Ontario is Canada’s largest economy. Therefore, its role is similar to that of Tokyo in many respects.” With the main purpose of Premier Wynne’s visit to Japan this time to promote investment in Ontario, the governor mentioned that Tokyo also aims to become a leading global financial city by attracting financial companies through the use of the national government’s special economic zones system, and is advancing the creation of an eco-friendly society.

Premier Wynne said, “Tokyo and Ontario’s relationship is very reassuring. The purpose of this visit to Japan is to build connections between businesses and deepen partnerships.” The premier then spoke about Ontario’s experience in hosting the 2015 Pan Am and Parapan Am Games, including the difficulties it encountered and how it delivered a successful Games, as well as the province’s efforts to reduce greenhouse gas emissions, saying that Ontario was engaged in efforts similar to Tokyo’s. Adding that she was also the first female to serve as Ontario’s premier, Premier Wynne conveyed a message of encouragement to women, saying, “Women will take on more leadership roles in government and other areas, and play a more significant role overall.”