Mayor of Tainan visits the governor 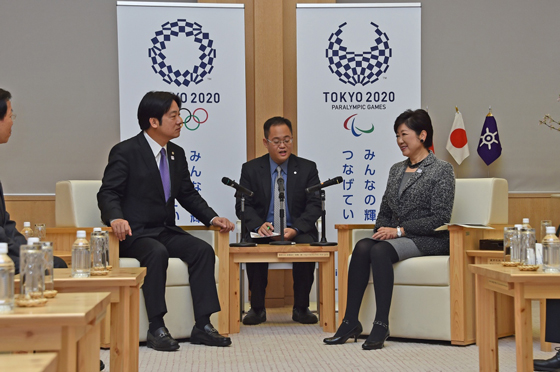 During the meeting, Governor Koike expressed her gratitude for the support from Taiwan after the 2011 Great East Japan Earthquake and the 2016 Kumamoto Earthquake. Recalling that in the wake of the 1999 Taiwan earthquake, she sent temporary housing units that had been used by the survivors of the 1995 Great Hanshin-Awaji Earthquake to Taiwan, she said that the Tokyo Metropolitan Government (TMG) will continue to work closely with the authorities of Japan, Taiwan, and Tainan in the event of natural disasters for the sake of the residents. She added that Tokyo hopes to deepen exchanges with Tainan in the field of tourism as well.

Mayor Lai apologized that he had to cancel his meeting with the governor last September because of a powerful typhoon that was approaching his city. He said that he is very glad that he can meet with her this time, and expressed his appreciation for the support from the TMG and Tokyo citizens in the wake of the earthquake that struck Tainan in February last year. He noted that Japan and Taiwan help each other in times of earthquakes and other disasters, and that they are neighbors with a family-like relationship.