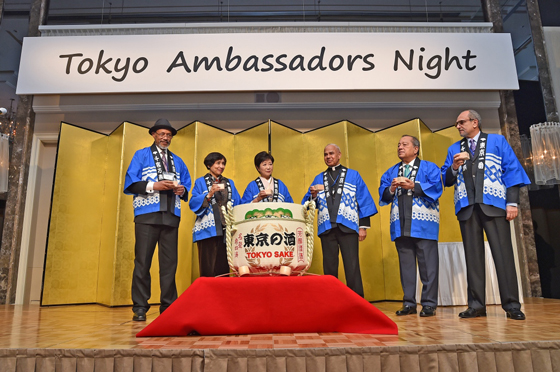 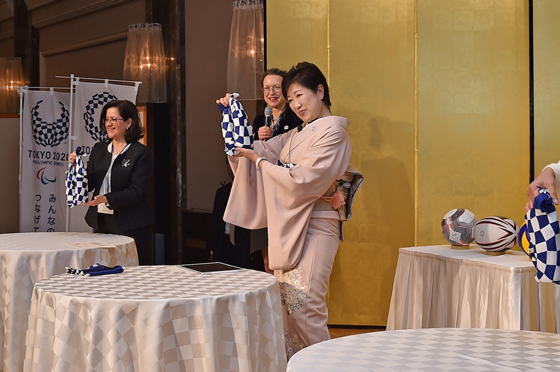 On Wednesday, January 25, Governor Koike welcomed ambassadors and members of the diplomatic corps to an event called “Tokyo Ambassadors Night” held at a Tokyo hotel.

The annual event was held to introduce the Tokyo Metropolitan Government’s policies, and to facilitate interaction between diplomats and the governor and her senior officials. Representatives from about 100 countries and regions attended.

In her opening speech in English, Governor Koike explained that in the action plan released at the end of last year the TMG aims to firmly establish Tokyo as a safe city, a diverse city, and a smart city.

She also said that the Tokyo 1964 Olympic Games “left us the metropolitan expressway as its legacy. We wish to have the 2020 Games leave a legacy of a ‘mature city.’ The Tokyo government possesses the various technologies needed to achieve this.…We plan to publicize these technologies to the world.”

Noting that the 2020 Games present a wonderful opportunity for children to learn about the history and culture of other countries, the governor said, “Tokyo’s public schools are implementing the ‘Global Friendship Project’ for promotion of exchange with countries and regions around the world to cultivate a rich international awareness among our children. I would like to request your ongoing cooperation for exchange with our children….I believe that such international understanding by young people will lead to stronger global ties.”

After the speech, several ambassadors joined the governor in a traditional “kagamibiraki” ceremony, in which the lid of a wooden barrel of sake is broken open with wooden mallets. The sake, called “Tokyo Meijo Club,” was then served to guests. Tokyo Meijo Club is a brand of sake produced jointly by nine sake breweries in Tokyo.

Later in the event, Governor Koike gave a “furoshiki” wrapping cloth demonstration, using one specially designed as official merchandise for the Tokyo 2020 Games. She told the guests that the furoshiki, which has been used in Japan since olden times, represents the Japanese idea of “mottainai (too precious to waste)” because the cloth can replace plastic bags or other packaging and can be used repeatedly.