Roundtable on Smart Cities and the Environment 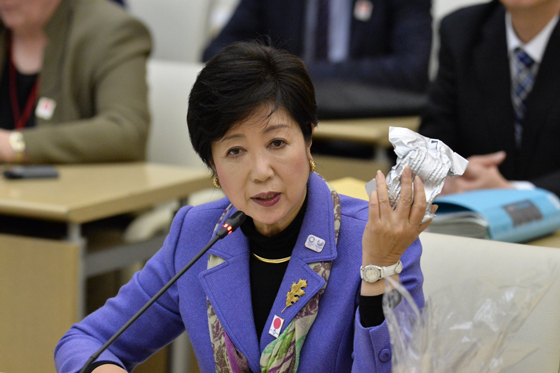 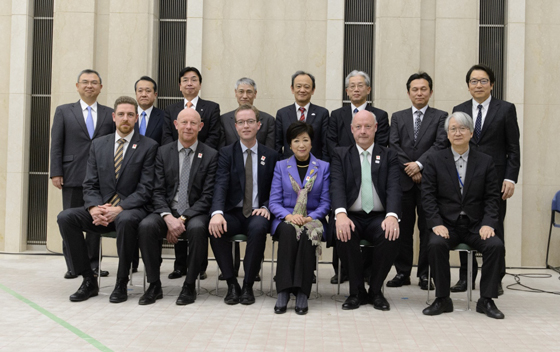 On March 7, 2017, Governor Koike joined a Roundtable on Smart Cities and the Environment, held at the Tokyo Metropolitan Government.

The event coincided with the visit to Japan of the Danish Minister for Environment and Food. It was a chance for the Danish side to introduce their country’s initiatives in areas such as food waste and renewable energies, and for the Tokyo Metropolitan Government (TMG) to introduce the city’s initiatives promoting the realization of a smart city. Private sector companies were also included in the discussion.

The roundtable was split into two parts. The theme of the first part was “Food Loss and Waste Reduction.”

Governor Koike introduced the TMG’s initiative to distribute stockpiled emergency crackers, which were soon to go out of date, at events, and to food banks and children’s cafeterias. She also described how food waste can be reduced by taking effective measures at every stage, from production, through distribution, to the point where food reaches consumers. Finally, Governor Koike said that the TMG had introduced the “Tokyo Food Loss and Waste Reduction System” to focus on the UN Sustainable Development Goal (SDG) of halving food waste by 2030, and of achieving this target in time for the Tokyo 2020 Olympic and Paralympic Games.

Next, Esben Lunde Larsen, the Danish Minister for Environment and Food, introduced Denmark’s initiatives regarding food loss and waste reduction, and this was followed by a discussion.

The second part of the roundtable was on the theme of “Toward a Hydrogen-Based Society.”

Governor Koike pointed out that hydrogen energy has great potential from both an environmental and security perspective. She introduced some of the TMG’s proactive measures to spread the use of hydrogen energy including installing hydrogen stations, introducing fuel cell buses, and trialing fuel cell fork-lift vehicles. She also mentioned an agreement with Fukushima Prefecture to create hydrogen using solar and wind power, as part of the CO2-free hydrogen initiative, saying that the aim is to be in a position to produce CO2-free hydrogen in Fukushima Prefecture for use by the time of the Tokyo 2020 Olympic and Paralympic Games. She added that promoting a hydrogen society requires education, noting that the TMG has produced videos that explain hydrogen energy, and launched the Tokyo Hydrogen Museum (“Tokyo Suiso-miru”).

Next, Mr. Larsen described some of Denmark’s initiatives, explaining that currently Denmark generates 40 percent of its electricity from wind power. He said that Denmark had been promoting renewable energies since the 1970’s oil crisis, and that it was important first of all for each individual member of society to commit to making a contribution.

Finally, there were presentations of initiatives being taken by the private sector, and a discussion. Governor Koike closed the proceedings by saying she hoped to continue to share understanding with other countries on issues related to energy security and the environment.