Mayor of Taichung visits the governor 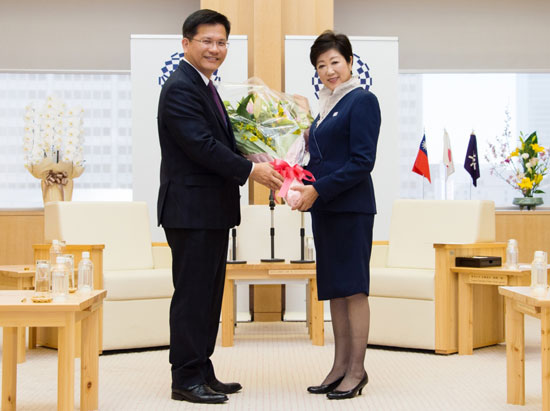 During the meeting, Governor Koike expressed her gratitude for the support from Taichung after the 2011 Great East Japan Earthquake and the 2016 Kumamoto Earthquake. She also noted that in the wake of the 1999 Taiwan earthquake, she sent temporary housing units to Taiwan and extended support for the reconstruction of a local Japanese elementary school damaged by the tremor. She said, “When the new school was complete, I visited Taichung to mark the occasion, and planted a cherry tree. I think the cherry tree has grown, and so have those Japanese children. Just like the cherry tree, I hope collaboration among Japan, Tokyo, and Taichung will grow even further.”

Mayor Lin expressed his appreciation for the support from Japan in the wake of the 1999 Taiwan earthquake, and added that the fact that Taiwanese people worked to help those affected by the 2011 Great East Japan Earthquake was a reflection of the friendship between Japan and Taiwan. Referring that the 2018 World Flora Exposition and the 2019 East Asian Youth Games will be held in Taichung, he said that he hopes to learn a lot from the Tokyo Metropolitan Government’s experience, including what it is doing to protect the environment and ensure smooth transportation in preparation for the Tokyo 2020 Olympic and Paralympic Games.