Governor meets with the Mayor of Almaty 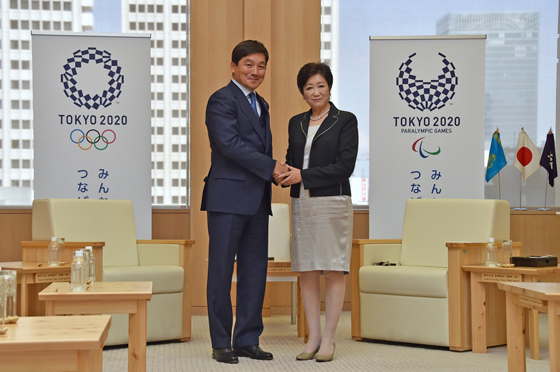 On Monday, April 3, Governor Koike met with Baibek B.K., the mayor of Almaty City, Republic of Kazakhstan, at the Tokyo Metropolitan Government.

Governor Koike spoke about the many athletes from Tokyo who participated in the Winter Universiade held in Almaty this past January, and her fondness of Almaty and the Republic of Kazakhstan, which she had visited several times before.
She said, “Kazakhstan is a major energy and resource provider. The country plays a key role in Central Asia. It would be good if Tokyo could share its administrative expertise with Kazakhstan’s major city, Almaty.”

Mayor Baibek B.K. said that he believed Tokyo and Almaty had a number of similarities, such as being population and economic centers and focusing on infrastructure, citizen safety and the environment. He spoke about the efforts Almaty devoted to reducing costs related to the Winter Universiade and to leave what was constructed as a lasting legacy, and said he hoped the Tokyo 2020 Games would leave a wonderful legacy and prayed for the success of the Games.