Governor meets with the Mayor of Ulaanbaatar 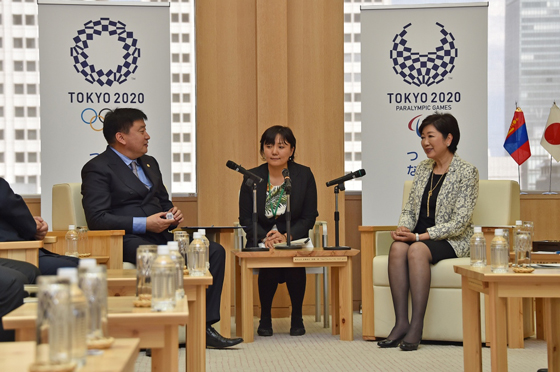 The governor said Mongolia is an important partner for Japan, noting that the two countries are celebrating the 45th anniversary of the establishment of diplomatic ties this year. She then expressed her gratitude for the various forms of support extended by Mongolia in the wake of the 2011 Great East Japan Earthquake. Speaking about her visit to Mongolia during her term as Minister of the Environment, she said, “I think Ulaanbaatar, with its concentrated population, faces issues unique to large cities. I hope Tokyo will be able to deepen cooperation with your city.”

Mayor Batbold congratulated Governor Koike on becoming Governor of Tokyo. He said he understands that the two countries marking the anniversary this year are broadening and developing this relationship at significant levels in various fields. Referring to the importance of mutual understanding between peoples of the two nations, the mayor of Mongolia’s capital added, “I hope our two cities will be able to further deepen exchanges and develop relationships while we are both in office.”