Governor meets with the Commander of the U.S. Pacific Command 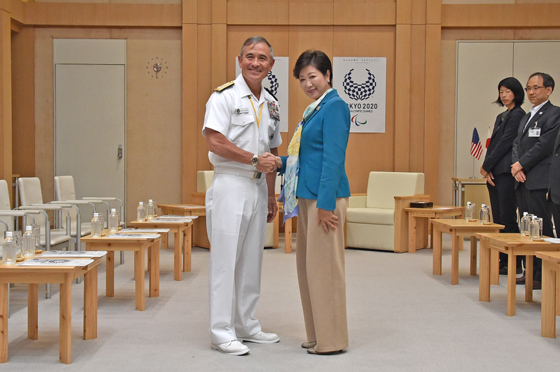 On Tuesday, May 16, Governor Koike met with the Commander of the U.S. Pacific Command (USPACOM), Admiral Harry B. Harris, Jr., at the Tokyo Metropolitan Government.

At the meeting, the Governor explained that Tokyo is advancing preparations to welcome many athletes and supporters from the U.S. to the Olympic and Paralympic Games Tokyo 2020, and said, “To deliver an amazing Games, we must first ensure safety and security. From the standpoint of ensuring safety, I hope for your continued support within the context of friendly Japan-U.S. relations.”

Admiral Harris offered his best wishes for the success of the Tokyo 2020 Games, and stated that the U.S. Forces hope to support the Games as much as possible. He went on to say that the U.S.-Japan Alliance remains very strong and continues to steadily evolve.