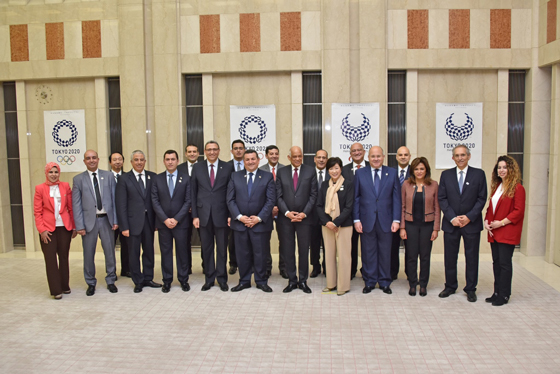 On Monday, May 22, 2017, Governor Koike met with a delegation led by Dr. Aly Abdel Aal Sayed Ahmed, Speaker of the Egyptian House of Representatives, at the Tokyo Metropolitan Government.

The governor expressed her expectations that the Egypt-Japan Education Partnership, which was established in 2016, will be a symbol of stronger relationships between Japan and Egypt for future generations as well. She expressed her gratitude for the support given for the 2011 East Japan earthquake and tsunami and the 2016 Kumamoto Earthquake, and also expressed her sympathy for the victims of the April terrorist attack in Egypt. The governor said that Japan is working to help bring safety and stability to the Middle East region, and she hoped to cooperate with Cairo, which is a large metropolis like Tokyo, in areas such as counter-terrorism. Governor Koike added that along with supporting and cheering on youth, she hopes Japan will cooperate for the region’s stability, especially in crisis management.

Dr. Abdel Aal, upon mentioning the very strong ties between Egypt and Japan in economy and culture, said that Japan is assisting Egypt with large projects in fields such as health, education and transportation, and that Governor Koike is also contributing to stronger relations between Tokyo and Cairo. He went on to touch upon Tokyo and Cairo’s commonalities as megacities, stressed the importance of further strengthening their friendship city relationship, and offered his full support to the Olympic and Paralympic Games Tokyo 2020.