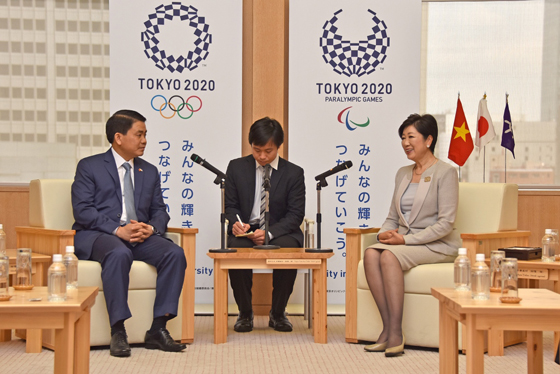 The governor spoke of the warm welcome Their Majesties the Emperor and Empress received during their visit to Vietnam this February, and also mentioned the medals won by Vietnamese athletes at the Rio Games. She offered words of encouragement saying, “I hope that many Vietnamese athletes join us for the Tokyo 2020 Games and take home medals.” She also spoke on the issues that both Tokyo and Hanoi face, such as air pollution, waste and waterworks, saying, “I hope that our cities can cooperate in various areas to make Hanoi a city that is healthy for all and sustainable.”

In response, Chairman Chung spoke about how Hanoi is confronted with environmental issues and transportation issues such as traffic congestion. He added that “Japan and Vietnam have many cultural similarities. The visit by Their Majesties deepened the friendly relations between our two countries.”