Tokyo signs an MoU with the City of London 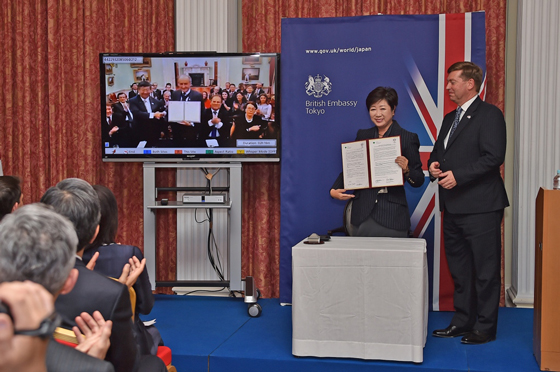 On Monday, December 4, Governor Koike signed a Memorandum of Understanding (MoU) with the City of London in a ceremony held at the official residence of the British Ambassador to Japan.

As part of the initiatives taken by the Tokyo Metropolitan Government (TMG) to create “Global Financial City: Tokyo,”it was decided to conclude an MoU with the City of London, the financial services hub of London, for collaboration in areas such as financial events, educational programs on finance, and green finance.
This is the first time for the TMG to conclude an agreement in the area of finance.

Lord Mayor Charles Bowman of the City of London participated in the signing ceremony from London by video conference, and British Ambassador Paul Madden from the Ambassador’s residence in Tokyo.

Governor Koike spoke of her expectations toward the MoU:“I hope our collaboration will lead to the advancement of both cities.” Lord Mayor Bowman replied, “I wish to strengthen our cooperation in the financial field.” The governor and mayor then signed the MoU.