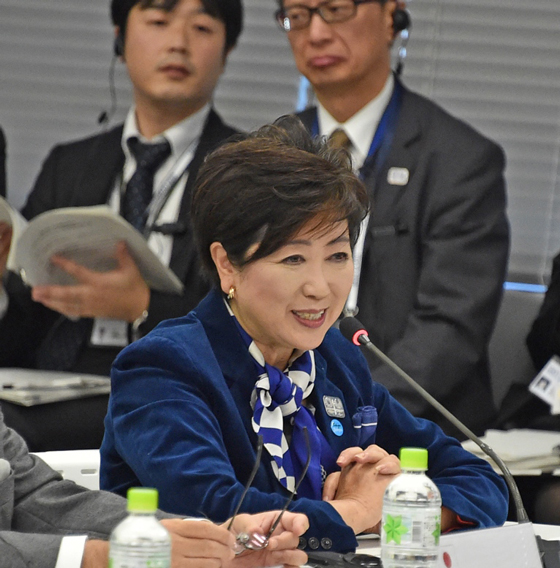 On December 11, Governor Koike attended the opening session for the 5th IOC Coordination Commission Meeting, which was held over three days from Monday, December 11 to Wednesday, December 13.

Among those attending the session were John D. Coates, AC, Chair of the Coordination Commission for the Games of the XXXII Olympiad Tokyo 2020, Yoshiro Mori, Tokyo 2020 Organising Committee President, and Shunichi Suzuki, Minister in charge of the Tokyo Olympic and Paralympic Games.

Governor Koike mentioned the opening of the first new permanent venue of the Tokyo 2020 Games, Musashino Forest Sport Plaza and said, “While also making it our goal to leave a post-Games legacy, we will steadily advance the construction of the new venues and accelerate preparations to deliver a successful Games.”

She spoke about demonstrations of Olympic sports at the Tokyo 2020 Olympic and Paralympic Countdown “1,000 Days to Go” events jointly held by the Tokyo Metropolitan Government and the Tokyo 2020 Organising Committee, saying, “We will work to raise momentum for the Games by having many people deepen their understanding of the new Olympic sports.”

The governor also declared her determination to have zero carbon emissions for the four days of the opening and closing ceremonies of the Olympic and Paralympic Games, utilizing the Tokyo Cap-and-Trade Program. “I believe the success of the Games will come from a combination of the efforts of the athletes, our cooperation with you, and the various initiatives taken by Tokyo as the host city. I hope for Tokyo 2020 to also leave an intangible legacy in the form of a message to the future that will be passed on to the next Games.”