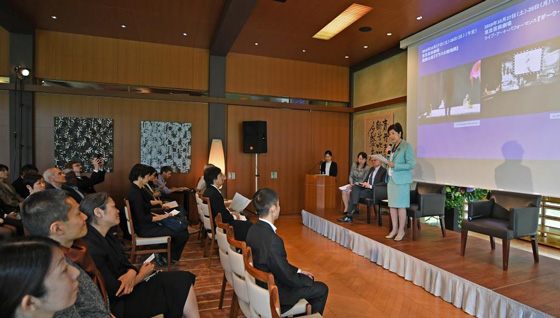 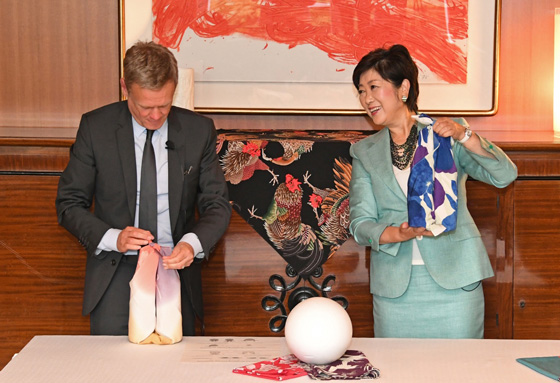 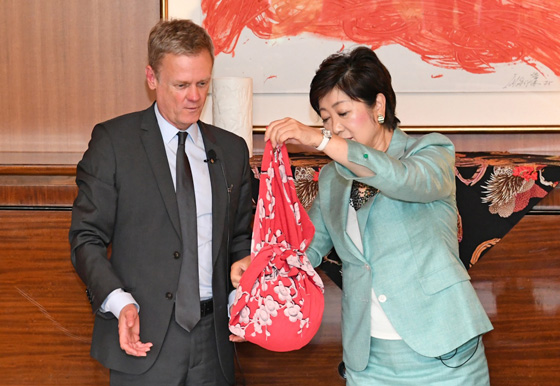 On Wednesday, June 6, Governor Koike attended a presentation at the Embassy of France where events chosen for Tandem Paris-Tokyo 2018 were announced.

Tandem Paris-Tokyo 2018 is a cultural exchange project to be carried out in 2018 by the city of Paris, the Tokyo Metropolitan Government, and Institut Français (the French government’s official organization for promoting French culture) with the cooperation of the Embassy of France in Japan. As a part of the Joint Communiqué of the Governor of Tokyo and the Mayor of Paris on October 23, 2017, a myriad of cultural events will be held in Tokyo and Paris to widely promote the cultural charms of the two cities to the world, along with raising enthusiasm for the Tokyo 2020 Games from the cultural aspect.

Mentioning that Tokyo and Paris have successfully collaborated in the fields of environment, sports, the arts, culture, and economics since becoming friendship cities in 1982, the governor said, “I hope that Tokyo and Paris are able to further deepen ties in various fields. I want to pass down the legacy of the Tokyo 2020 Games’ theme of sustainability to Paris for their 2024 Games.”

The events that will be held this fall in Tokyo for Tandem Paris-Tokyo 2018 were then introduced. They include a collaboration performance featuring the traditional Japanese instrument sho and a circus, an art deco exhibition, a poster contest by university students, and a concert by the Orchstre de Paris.

Events that will be held in Paris by the Tokyo Metropolitan Government such as an art brut (outsider art) exhibition, a kinetic exhibition of karakuri (puppet) dolls, and furoshiki (wrapping cloth)-themed art events were introduced. The governor said that “Furoshiki is a tradition, culture, and environmental wisdom of Japan. I hope that Parisians will appreciate furoshiki through this event,” and continued, “By deepening cultural exchange, I hope that Paris and Tokyo can continue to have strong relations.”

The governor later taught Ambassador Pic how to wrap furoshiki while promoting its appeal.