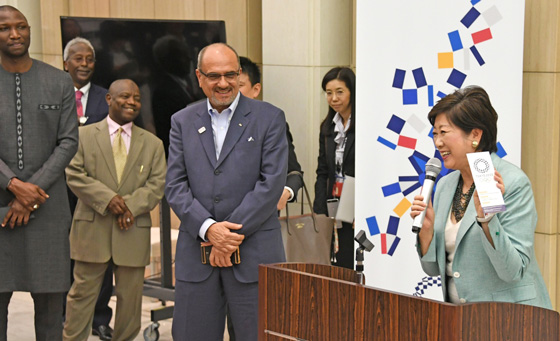 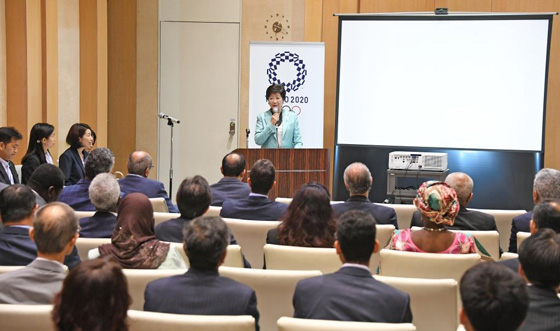 At the meeting held before the Networking Night, Governor Koike said, “We are advancing a range of preparations for the Tokyo 2020 Games, so that we can welcome athletes and visitors from around the world. In addition, we are continuing to focus on initiatives to welcome Muslim tourists. One of the challenges we face in preparing for the Games is the heat of summer. Road surface temperatures can be as high as 50 degrees Celsius at times. Therefore, we hope to use a Japanese technology―solar heat-blocking pavement―to curb the rise in road surface temperature... We hope to steadily advance efforts to become a smart energy city, including building effective systems, and show the world Japan’s excellent environmental policies at the Tokyo 2020 Games.” She also asked for continued cooperation with the Global Friendship Project: an initiative where public school children in Tokyo learn about the histories and cultures of countries scheduled to participate in the Tokyo 2020 Games.

At the Networking Night following the meeting, Governor Koike explained that TMG officials hoped to deepen their understanding of the world of Islam and that they would like to learn more from the attendees to help ensure Muslim visitors enjoy a comfortable stay in Tokyo.

The Tokyo Networking Night was attended by ambassadors and representatives from 34 countries and regions. In the hall where the networking event took place, areas featuring translation devices to help support communication with overseas tourists, a solar heat-blocking pavement demonstration, and panels introducing TMG measures were set up. Halal food was also served.