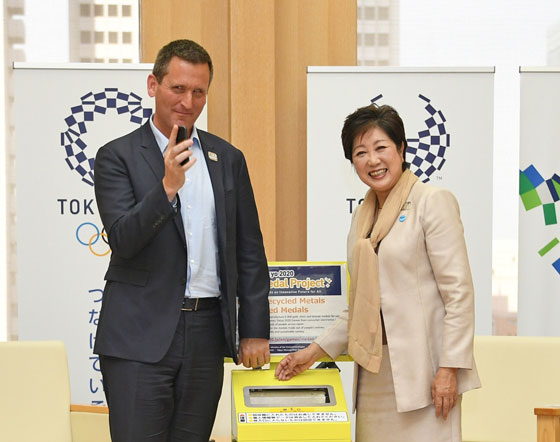 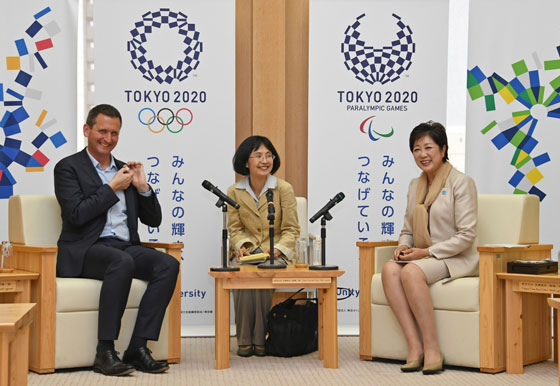 On Tuesday, May 29, Governor Koike met with Lord Chris Holmes, United Kingdom Parliamentarian and former Paralympian and Director of Paralympic Integration during the 2012 Paralympic Games in London, at the Tokyo Metropolitan Government.

The governor welcomed Lord Holmes, whom she had not met since the Rio Games and presented him with a Tokyo 2020 Games pin badge made for visually impaired persons. She said, “I would like to thank you once again for the considerable guidance and advice you gave from your experience operating the London Games and from the perspective of a Paralympian when you delivered lectures at symposiums for local citizens and those involved in the Tokyo 2020 Games and spoke at a local elementary school during your visit to Japan in May two years ago,” adding that she hopes to apply the experiences of the 2012 London Games in the Tokyo 2020 Games.

Lord Holmes explained that, “Stoke Mandeville in the United Kingdom was the birthplace of the Paralympic Games. But it was Tokyo in 1964 that hosted the first Games called the ‘Paralympic Games’ in the same city as the Olympic Games.” He gave the bullet train as an example of the innovation that came out of the Tokyo Games in 1964. He then said that, “In 2020, Tokyo will have the opportunity to speak to the world about the possibilities and the potential for every individual across Japan, and through that, a message of possibility to every individual around the world.”