Governor meets with Director of the WHO Kobe Centre 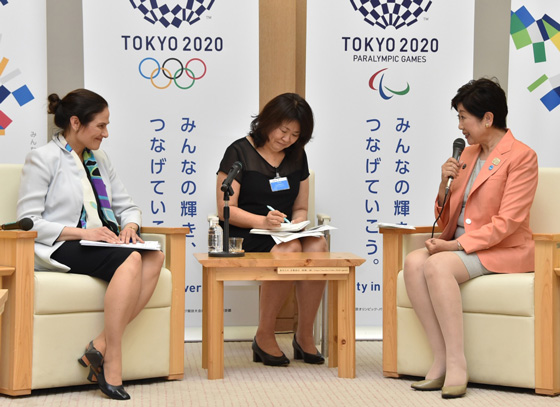 Dr. Barber congratulated and praised the TMG on its enactment of an ordinance to curb second-hand smoke, saying that she was impressed with the powerful measures taken by the TMG ordinance to protect children and workers and that its implementation ahead of the Rugby World Cup 2019 and the Olympic and Paralympic Games Tokyo 2020 was wonderful. She added that overseas visitors would be extremely pleased with Tokyo creating a 100% smoke-free environment and that this ordinance is a hugely important step to achieving the goal of reducing the percentage of smokers in Japan by 2022.

Governor Koike responded that, “It has been scientifically shown that second-hand smoke increases the risk of lung cancer, stroke, and SIDS. Preventing such illnesses and events means protecting the citizens of Tokyo. This ordinance to prevent passive smoking is Tokyo’s ordinance but I hope it will have a positive influence on local governments outside Tokyo that also host Olympic and Paralympic venues. I want to have a firm environment in place where the health of Tokyoites and visitors from overseas is protected and everyone can enjoy the big sporting events of 2019 and 2020.”