Governor meets with Mayor of Chicago 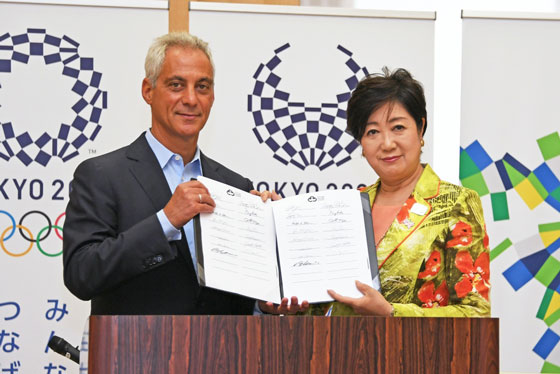 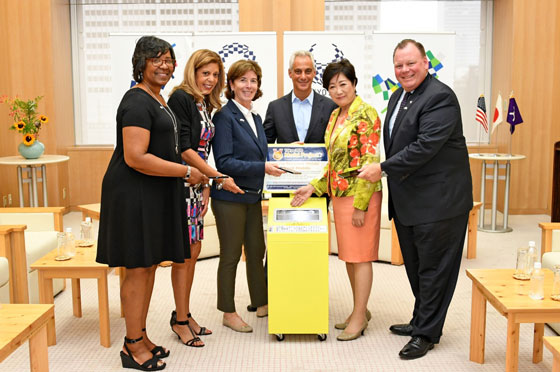 During the meeting, Governor Koike signed the Chicago Climate Charter* and said, “The TMG is taking various steps to become a sustainable city. Chicago is also a large city, and the environmental measures large cities take have a huge impact,” and “I hope we can continue to share policies to protect citizens’ lives and health from climate change.”

Mayor Emanuel remarked that Chicago and Tokyo share a common bond in the “Olympics,” explaining that 50 years ago Chicago hosted the first ever Special Olympics for people with intellectual disabilities, and toward the end of July, those games will once again be held in Chicago to commemorate their 50th anniversary. He went on to say that the first ever initiative to involve the public in making the Tokyo 2020 Games medals from recycled materials is in the same spirit that drives the Chicago Climate Charter to “find innovative ways to make a great city a sustainable city, as it expands opportunity.”

* A declaration by mayors taking steps to address climate change, announced at the North American Climate Summit hosted by the City of Chicago in December 2017. The summit participants (mayors from the United States, Canada, Mexico, Paris Mayor Anne Hidalgo, and others) signed the document, and afterwards, it was placed on Chicago’s website with calls for signatures from other mayors. As of July 6, 2018, 68 cities have signed the charter.