Governor meets with UK Secretary of Foreign and Commonwealth Affairs 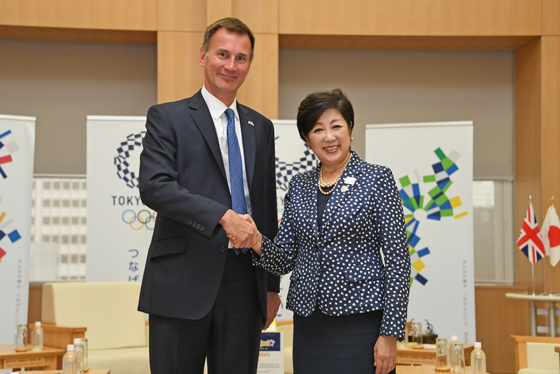 On Tuesday, September 18, Governor Koike met with The Rt Hon Jeremy Hunt MP, Secretary of State for Foreign and Commonwealth Affairs of the United Kingdom, at the Tokyo Metropolitan Government.

Governor Koike explained that, “As Tokyo and Japan are rapidly aging, preparations being made for the Tokyo 2020 Paralympic Games will be hugely beneficial to urban development supporting those with disabilities and the elderly” and “We have a lot to learn from London for the success of the Tokyo 2020 Games. I would like to continue to get your advice.”

Foreign Secretary Hunt, who was the Culture Secretary responsible for the Olympics during the London 2012 Summer Games, praised the focus given to the Tokyo 2020 Paralympic Games. He said, “I think the big opportunity for Japan is that you can make your Paralympic stars as famous as your Olympic stars. You can change the attitude of the whole country towards disability in a very powerful way.”