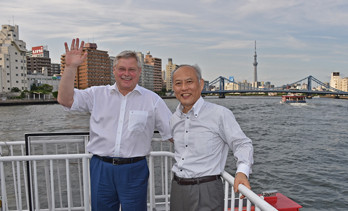 After the meeting, the two signed a memorandum of understanding, which calls for exchange and cooperation between the Tokyo Metropolitan Government and Tomsk Regional Administration in the areas of cooperation between universities, measures to combat infectious diseases, promotion of tourism, and waste management. At the same time, Tokyo Metropolitan University and Tomsk State University signed an agreement to collaborate in areas such as exchange of faculty and students, as well as research activities. At a joint press conference, Governor Masuzoe said, “Tokyo and Tomsk will move forward as good partners, continuing to build a win-win relationship. I hope many people from Tomsk will come to Tokyo when the Olympic and Paralympic Games are held in 2020.”

Following the signing of the MOU, Governor Masuzoe gave Governor Zhvachkin a tour of Tokyo, showing him the Edo-Tokyo Museum, the Sumida River, and Hama-rikyu Gardens.