Members of the diplomatic corps gather for “Ambassadors & Tokyo” 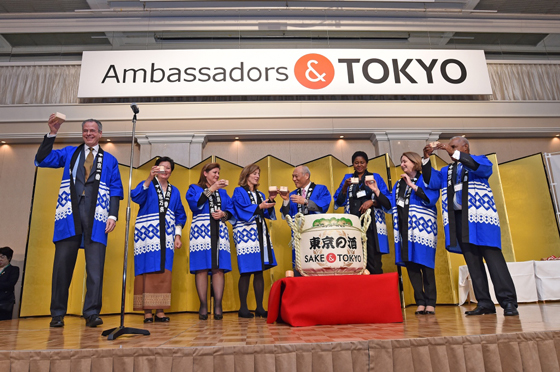 On Thursday, January 14, Governor Masuzoe welcomed ambassadors and members of the diplomatic corps to the “Ambassadors & Tokyo” event.

The event was held to introduce various Tokyo Metropolitan Government policies, and to facilitate interaction between diplomats and the governor and senior officials. Representatives from around 90 diplomatic missions attended.

The Governor began his opening speech saying, “We decided to call this event Ambassadors & Tokyo to express our wish to deepen ties and cooperation with you.” He mentioned several areas where the TMG wishes to work closely with embassies, including preparing for a successful Rugby World Cup in 2019 and the Olympic and Paralympic Games in 2020. Announcing the expansion of the Olympic and Paralympic Education program to all Tokyo schools from next fiscal year, the Governor said the TMG may ask embassies to help promote international exchange and understanding by introducing their countries to school students. Finally, he requested support both in attracting foreign companies to Tokyo and in helping Japanese companies to develop business overseas.

After the speech, several ambassadors joined the Governor on stage. Brazil Ambassador Andre Aranha Correa do Lago gave the toast, after breaking open a barrel of sake with U.S. Ambassador Caroline Kennedy and others in a traditional "kagamibiraki" ceremony. The sake, called “Tokyo Meijo Club,” was then served to guests. Tokyo Meijo Club is a new brand of sake launched jointly by nine sake breweries in Tokyo.