The President of Palestine visits the Governor 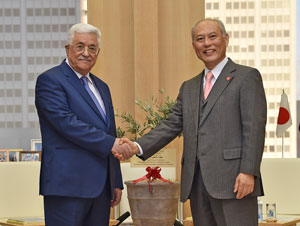 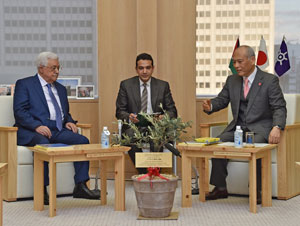 The governor expressed his appreciation of the president’s visit to Tokyo. He gave thanks for the olive tree gifted to Tokyo by the president. Mentioning the Sekai Tomodachi Global Friendship education program, which promotes exchange between Japanese schools and countries participating in the Tokyo 2020 Olympic and Paralympic Games, the governor said the tree could be planted at the metropolitan school which will exchange with Palestine, as a symbol of solidarity between Tokyo and Palestine.

The governor also conveyed his hope that many athletes and spectators will come from Palestine for the Tokyo 2020 Games.

The governor also introduced the Tokyo Tech Book, a compilation of the various technologies and know-how of the Tokyo Metropolitan Government which aims to help resolve issues in Japan and abroad, and the Diaster Preparedness Tokyo manual, and expressed his hope that Palestine will find Tokyo’s expertise useful.