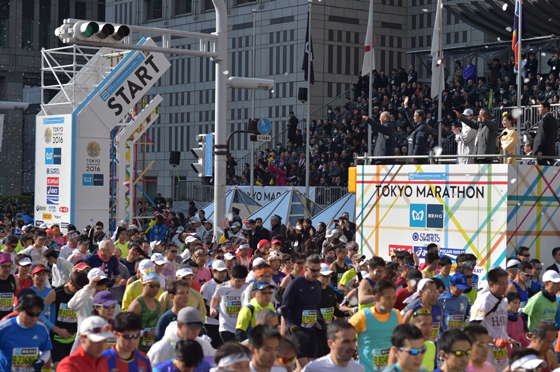 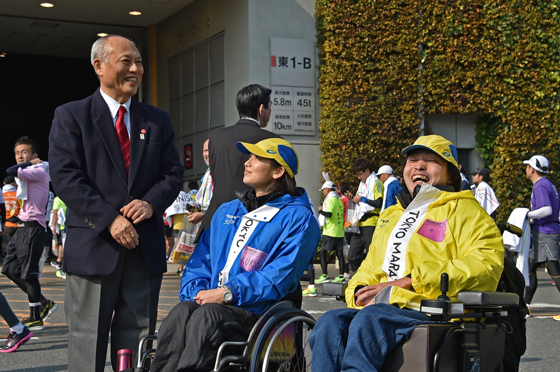 The Tokyo Marathon marked its 10th anniversary on Sunday, February 28.

First held in 2007, the Tokyo Marathon has continued to draw a great deal of attention from home and abroad. This year, the event was given a new logo, and its wheelchair race was certified by the IPC (International Paralympic Committee) as a qualifying race for the Paralympic Games. On Sunday, about 37,000 runners raced through the city center.

After seeing the runners leave the starting point in front of the Tokyo Metropolitan Government Building, Governor Masuzoe moved to the finish area at Tokyo Big Sight, and presented gold medals and laurels to the winners of the wheelchair competitions and marathon competitions.

At the After-Run Thanks Party, which was held to commemorate the 10th anniversary of the marathon, the governor delivered a speech, saying, “We owe the success of today’s marathon to the runners, volunteers and everyone who worked on this event. Tokyo will be hosting the Olympic and Paralympic Games in 2020. We will make good use of what we learned today to stage a wonderful Games.”

During the race, the governor visited with volunteers with impairments. After that, he said, “I am so grateful to the volunteers. Having even more people, with or without impairments, serve as volunteers will help unite Tokyo, and all of Japan. I believe it is our responsibility to create a supportive environment for volunteering. We will do our utmost to that end.”