Mayor of Paris views the site of the planned Olympic Village 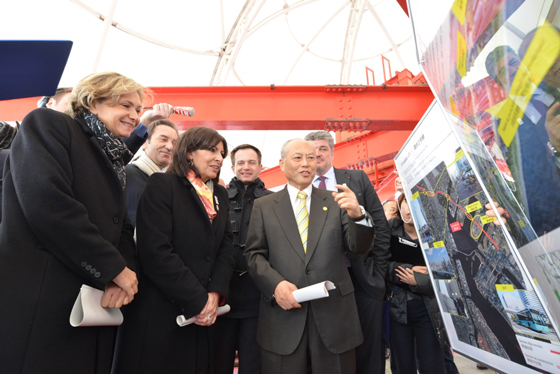 On Monday, February 29, Governor Masuzoe accompanied Anne Hidalgo, Mayor of Paris, and Valérie Pécresse, President of the Regional Council of the Ile-de-France, to the viewing platform at Harumi Passenger Ship Terminal, from where they observed the planned site of the Tokyo 2020 Olympic Village. The governor gave an explanation of the Olympic Village, and of the new cruise ship terminal and Toyosu wholesale market which will also be located in the area.

The governor said he wanted to demonstrate the great changes underway in Tokyo and that this was the best place to do so, by viewing the site of various planned developments from above. He said he hoped it would provide a useful example for Paris as it bids for the 2024 Olympic and Paralympic Games. Mayor Hidalgo agreed and noted the similarities between the Tokyo 2020 plan and the Paris 2024 bid, such as the siting of facilities in the waterfront area and the importance attached to the legacy of the Olympic village.