Governor of Jeollanam-do visits the Governor 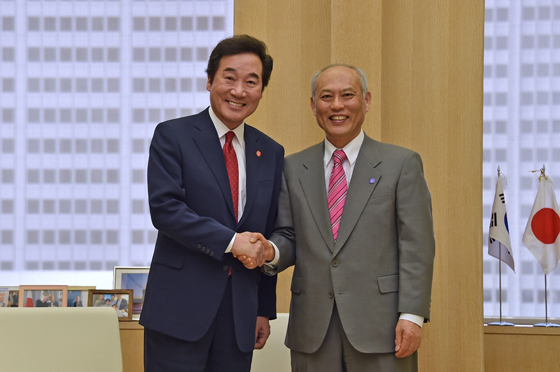 On Friday, March 18, Governor Lee Nak-yon of Jeollanam-do province in the Republic of Korea met with Governor Masuzoe.

Governor Masuzoe spoke of the collaboration between Tokyo and Jeollanam-do and said that he hoped many visitors from the province would come to Japan during the Tokyo 2020 Olympic and Paralympic Games. Governor Lee offered thanks for the opening of discussions regarding usage of Tokyo metropolitan land for a Korean school, following the request of his country’s government. Governor Masuzoe responded that the Japanese School in Seoul had also received assistance. He added that children are an important generation who will act as a bridge between the two countries. He said he hopes to create an environment where children can learn about both cultures and that this would serve not only relations between Japan and Korea, but also world peace.