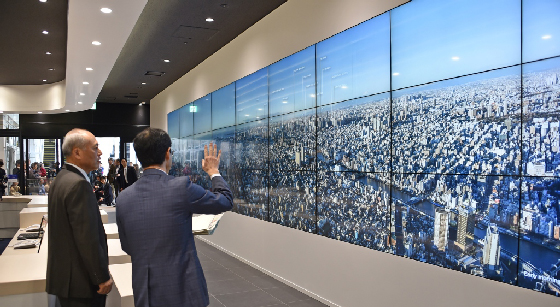 With the opening of the new Busta Shinjuku bus terminal, which directly connects to JR Shinjuku Station, the Tokyo Metropolitan Government opened a Tokyo Tourist Information Center on the third floor. In addition to providing tourist information for Tokyo and the entire country, the center provides a range of services needed by foreign tourists in one location.

The governor inspected the tourist information counter where service is available in English, Chinese, and Korean, a humanoid robot named Pepper that provides assistance to tourists, and 27 large display monitors promoting various places to visit.

Following the tour, the governor commented, “I think this new bus terminal has the potential to become a major tourist center. The services that we look for when traveling abroad—hotel reservations, assistance with travel arrangements, a baggage shipping service, foreign currency exchange, and Wi-Fi access—are all here at the Tokyo Tourist Information Center. Busta Shinjuku will even play a useful role in increasing the number of tourists. Using this terminal as a base, I hope to further convey the charms of Tokyo to the world.”

Later the same day, the governor attended the Busta Shinjuku opening ceremony as a special guest, and offered his congratulations saying, “With railways, buses, and taxis directly linked, transferring at Shinjuku Station has become remarkably convenient. I hope that Busta Shinjuku will be number one in the world, not only in scale, but also in quality, and be hugely successful as a center that warmly welcomes visitors from around the world with Japanese hospitality. I look forward to the attractions of Tokyo and all of Japan being promoted through the opening of this facility.”