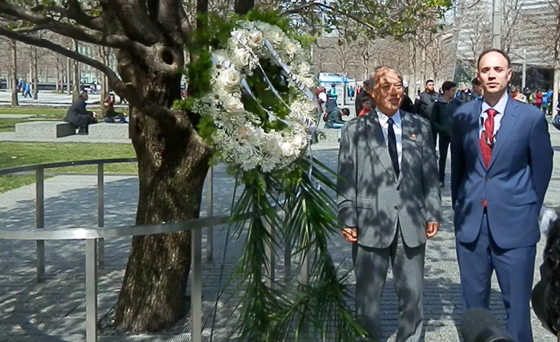 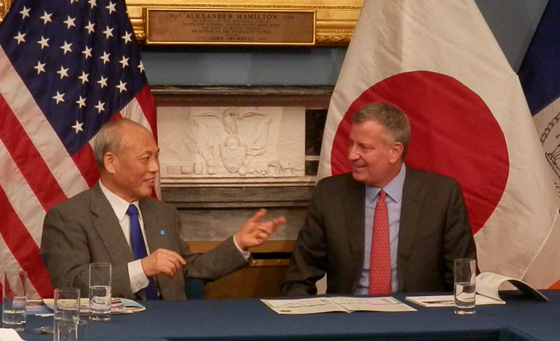 Governor Masuzoe left for an official visit to New York and Washington, D.C. on Tuesday, April 12. He will be back in Japan on Monday, April 18.

His itinerary contains meetings and other events aimed at further cementing the ties with New York, a sister city of Tokyo. The governor will attend the Miharu Takizakura cherry tree planting ceremony hosted by New York City, and give a lecture at the Japan Society. Moving then to Washington, D.C., he will take part in the National Cherry Blossom Festival and other events in an effort to build a stronger relationship between the capital cities of Japan and the United States. He will also give a lecture at the Center for Strategic and International Studies. Through these activities, Governor Masuzoe will strongly convey Tokyo as a city that is to grow dynamically taking the opportunity of the Tokyo 2020 Olympic and Paralympic Games.

On Tuesday, April 12, his first day in New York, Governor Masuzoe laid a wreath beneath the Survivor Tree at the National September 11 Memorial and offered his prayers to the victims and their families. Speaking to reporters, he said, “Recently, there have been terrorist attacks in various parts of the world, and that is one reason I visited this place first. The G7 Ise-Shima Summit will be held this year, and many people going to the event will come through Tokyo. We will firmly tighten our security in cooperation with the police, fire department, and national government.”

Following that visit, the governor called on Mayor Bill de Blasio and exchanged opinions. They confirmed that Tokyo and New York City will draw on their sister city relationship to strengthen ties in areas ranging from the environment to crisis management, water transportation, and tourism.