Governor visits the New York Stock Exchange (NYSE) and meets with the Mayor of Washington, D.C. 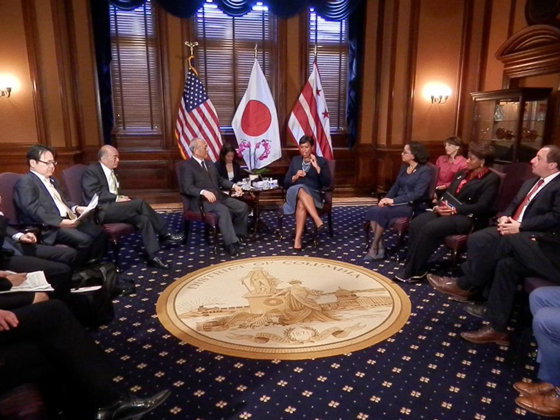 Governor Masuzoe is on an official visit to New York and Washington, D.C. from Tuesday, April 12, to Monday, April 18.

On Thursday, April 14, the governor visited the New York Stock Exchange (NYSE) to promote the Tokyo Global Financial Center concept and exchange views with senior executives. Speaking to the media, the governor first addressed the powerful earthquake centered in Kumamoto prefecture that occurred saying, “The Tokyo Metropolitan Government will offer any support needed. And, I have issued instructions to prepare to do so.” With regard to his visit to the NYSE, the governor said that it was the leader of stock exchanges and extremely dynamic. He said that Tokyo is looking to take steps such as launching a financial consultation service with the Financial Services Agency and holding international financial conferences. He also expressed his hope to continue policies that will enable Tokyo to regain vitality similar to that of New York in the area of global finance.

Following a site inspection of a park developed using an abandoned elevated freight train line called the High Line, the governor traveled to Washington, D.C. where he met with Mayor Muriel Bowser and discussed various topics. The governor and mayor confirmed their intent to strengthen cooperation between the two cities, both the capitals of their respective nations, in areas such as education and the environment. “We agreed to conduct youth exchanges, including organizing exchange student programs between the two capitals. The number of Japanese students studying abroad has gone down and I want to change that. I think this is very meaningful for Tokyo as it aims to further internationalize,” said the governor.