Governor gives a speech to the Center for Strategic and International Studies (CSIS) in Washington, D.C. 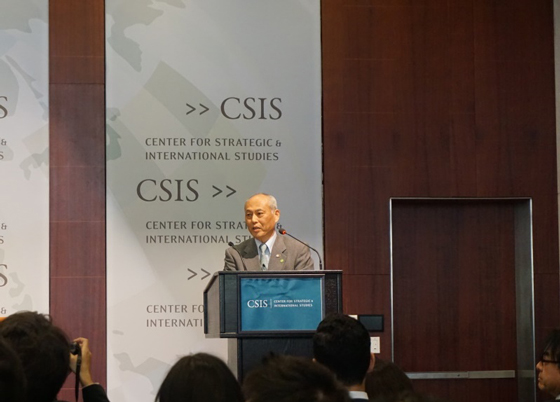 On Friday, April 15, Governor Masuzoe visited the Center for Strategic and International Studies in Washington, D.C., a think tank that hosts forums and seminars, including on Japan. At CSIS, the governor gave a speech on the theme of sustainability from the viewpoint of the economy, environment, and society, and described how Tokyo is working at the forefront to address common challenges being faced by the world's leading cities.

Following the speech, Governor Masuzoe told reporters, “It was meaningful, as I was able to convey not only to business groups, but also to many government officials and students at CSIS, the message that the two national capitals should seriously tackle the challenge of making cities sustainable.” Concerning the earthquakes that struck Kumamoto Prefecture and surrounding areas, he said, “Tokyo’s police and fire department are prepared to respond should a request for assistance be made. We will do everything we can to support those affected.”