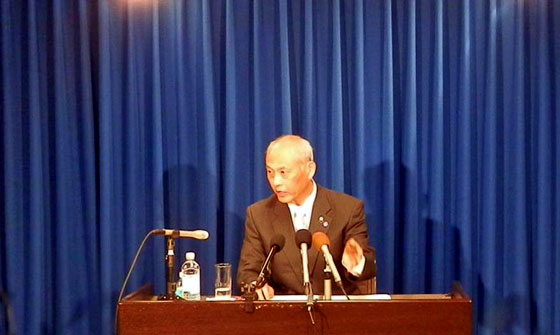 On Saturday, April 16, in Washington, D.C., the governor spoke at a press conference that concluded his official visit to the United States.

He began the meeting by speaking about the earthquakes that struck Kumamoto Prefecture and surrounding areas. He said, “I would like to extend my sincere condolences to the families of the victims. The Tokyo Metropolitan Government will do everything it can to support the areas affected by the disaster. I had TMG officials convene an information/liaison meeting on the Kumamoto earthquake, and instructed TMG bureaus to share information and strengthen their support system. The Metropolitan Police Department has sent special rescue teams and the Tokyo Fire Department has dispatched a helicopter.”

Regarding his visit to the United States, Governor Masuzoe said, “I told the executives of the world’s leading companies that Tokyo is a good place to invest. I explained that we are advancing initiatives to realize the Tokyo Global Financial Center and that an international financial conference is scheduled to be held in Tokyo this year. If global companies based in New York make investments in Tokyo, that will benefit us a lot.” He added, “Tokyo will need to learn various things from New York while competing against it. We also hope to deepen our relationship with Washington, D.C., which is the political center of the globe, enhance Tokyo’s international profile, and convey the attractions of Tokyo to the world.”