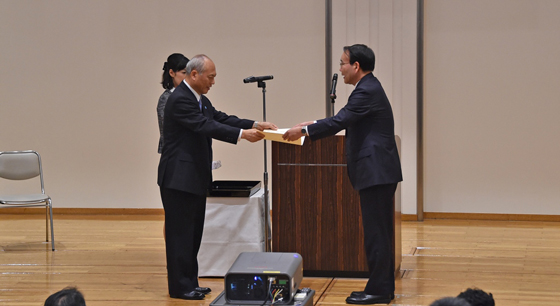 Lectures on the situation of terrorism were held at the meeting with the aim of broadly appealing to private businesses and organizations to strengthen security measures ahead of the Ise-Shima summit in order to prevent any acts of terrorism from occurring in Tokyo as well. This meeting was held at the same time as the 16th Conference of the Anti-Terrorism Partnership, TOKYO.

Governor Masuzoe greeted the participants at the opening of the meeting by stating: “The G7 Summit is said to be fair game for terrorist attacks, and there have been cases in the past of terrorists targeting the host country’s capital. This makes it necessary for Tokyo, the capital of Japan, to also heighten its security. Tokyo is well known for being a megalopolis with a high level of public safety, but our country and citizens have been mentioned as targets for terrorism, and Tokyo is also not unsusceptible to such attacks. Ahead of the Ise-Shima Summit, the Tokyo Metropolitan Government will also work with the national government, and along with the Metropolitan Police Department and the Tokyo Fire Department, we will do all in our power to uphold the safety of Tokyo. Self-efforts and initiatives taken in cooperation with others are important in being vigilant of and preventing acts of terrorism from happening. So, it is not only the government that should take action; cooperation by the communities, private businesses and groups will be crucial. As the person in charge of Tokyo, Japan’s capital, I would like to express my gratitude to you for implementing counterterrorism measures. The Tokyo Metropolitan Government will continue to do everything to prepare against terrorists attacks to protect the lives and properties of our residents.”

Following the speech, the “Anti-Terrorism Partnership TOKYO Commendation,” a ceremony commending businesses that have made outstanding contributions to counterterrorism, was held. The governor presented a letter of appreciation to Tokyo Metro for taking the initiative in introducing an emergency image transmission system that can send footage from cameras installed in their subways stations to the Metropolitan Police Department headquarters in the event of an emergency. The Superintendent General of the MPD also presented letters of appreciation to one organization and three businesses.