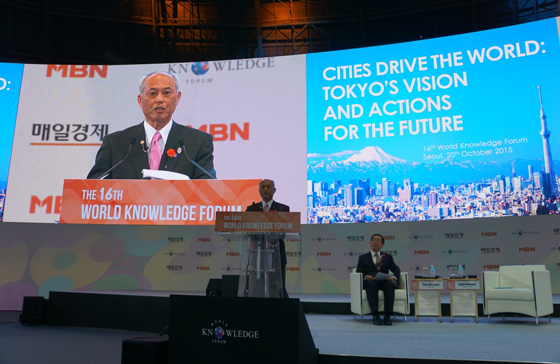 Governor Masuzoe spoke in Seoul at the 16th World Knowledge Forum on its 2015 theme, “Mapping the Zeitgeist,” and the central role that cities like Tokyo will play in shaping the future.

“My dream is to make Tokyo the best city in the world,” said the Governor. “I have learned that the best cities for both visitors and residents are the ones where you can get around – by foot, car or public transportation – with ease, safety and in the cleanest air possible.”

Governor Masuzoe talked about Tokyo’s urban livability projects as well as its expansion of the tourism industry. “With visitors in mind, we have implemented a new tourist guide system, with uniformed guides available to help visitors find their way. In fact, the inspiration for these guides came during my previous visit to this very city. Following in Seoul’s footsteps, these volunteers will bring a human face to Tokyo.”

He also reaffirmed Tokyo’s commitment to city-to-city diplomacy and environmental initiatives. In addition, Tokyo is investing in diversity, safety and opportunities for women in order to distinguish itself as a global financial hub.

“With Tokyo as the focal point, this influx of investment and capital in Asia will also provide enormous benefits to companies from neighboring countries.”

The governor finished his speech with a glimpse into Tokyo’s bright future. “Our city is at the forefront of technology for renewable resources, hydrogen power, and revolutionary healthcare for an aging society. We are addressing congestion, safety, and our impact on the environment. All of this lifts Tokyo a step higher, into a new tier of future city.”