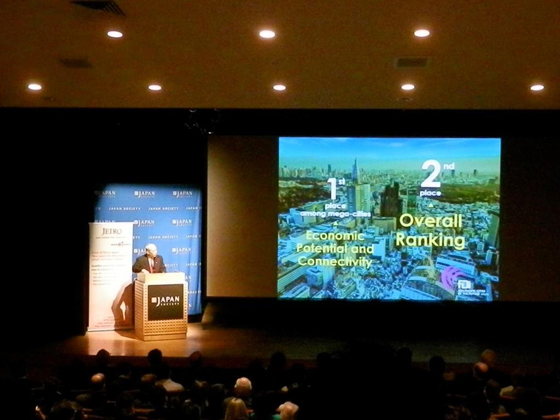 Governor Masuzoe of Tokyo visited New York, one of its sister cities for more than fifty years, and spoke to the Japan Society about strategies and pro-business initiatives to further make Tokyo the most business-friendly city in the world.

The Governor highlighted a number of initiatives that are making it easier for foreign companies to set up operations in Tokyo and the exciting investment opportunities for US enterprises in various sectors such as tourism, technology, and financial business.

“This includes the creation of a One-Stop Business Establishment Center which unifies the procedures required for companies to establish their operations in the Tokyo market, as well as systems to simplify paperwork and expedite immigration processes for nationals scheduled to work for companies that are approved by the Tokyo Metropolitan Government.”

Governor Masuzoe also outlined his desire for the upcoming 2020 Olympic and Paralympic Games to leave a legacy that supports a cleaner and more sustainable future. He shared some ideas for increasing the percentage of energy Tokyo consumes from renewable sources to thirty percent by 2030, and emphasized that the government would need the support of the private sector to achieve this.

“We are launching a number of public-private investment funds to show our commitment to policies driven by public-private partnership. These funds exemplify how Tokyo is trying new ways to encourage private capital investment from home and abroad in a bid to combat global warming through financial investment.”

Lastly, the Governor spoke about the future planning of Tokyo, including placing an emphasis on quality of life and safety with the goal of creating a more livable society.

“Moving forward, we are committed to driving the next step in the city’s evolution as a truly mature global city by promoting a more inclusive Tokyo where people can enjoy fuller, more balanced lifestyles.”

Governor Masuzoe also spoke of the fruitful conversation he had with New York Mayor de Blasio during his visit.

“Yesterday, I met with Mayor de Blasio and we spoke about the visions that each of us have for our two cities. While we will surely encounter bumps along the way, through city diplomacy I hope to share Tokyo’s knowledge with many countries and people, and together, we will be well placed to overcome any obstacles.”