Speech at the Center for Strategic and International Studies (CSIS), Washington D.C., April 15, 2016 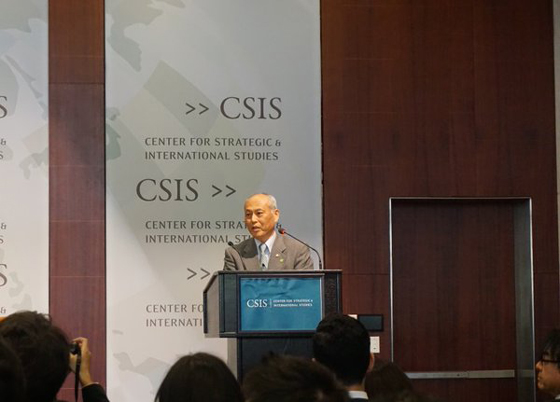 Governor Masuzoe spoke to the Center for Strategic and International Studies (CSIS) about the common challenges facing the world’s leading cities. In his presentation, he placed a special emphasis on the issue of sustainability.

“We are now in a time where leading cities around the world, such as Tokyo and Washington, are faced with common challenges, none of which is bigger than the issue of sustainability.”

The Governor outlined three specific areas of sustainability that Tokyo Metropolitan Government is tackling as a city: its economy, environment, and society. First, the Governor explained the important role capital cities play in building a sustainable economy.

“In order for a country to prosper while also contributing to the development of the global economy and society, it is vital for the capital city of that country to continue to evolve. Like Washington, Tokyo is the political center of Japan, but it is also its economic and financial heart, and for us to sustain the important role we play in global society, building a sustainable economy is crucial.”

In addition, Governor Masuzoe outlined some new initiatives for Tokyo to regain its title as Asia’s leading financial center.

“The city is already putting processes in place to try and attract more international financial forums to Tokyo, and plans are underway for an event this year. In addition, the Tokyo Metropolitan University has recently launched new finance courses for its prestigious business school. We are expecting that this will make it easier for foreign businesses to hire strong local talent when setting up in Tokyo.”

The second challenge is the fight against global warming and the pressure to invest in renewable energy sources to build environmental sustainability. The Governor presented a broader vision to leverage hydrogen fuel cell technology to eliminate CO2 emissions and create a new hydrogen-based society.

“The Tokyo Metropolitan Government has set aside over 350 million dollars (40 billion JPY) to promote the adoption of hydrogen-powered cars and, importantly, the fueling stations necessary to power them. By 2030, we aim to have a network of 150 fueling stations, with 200,000 fuel-cell vehicles in operation.”

Lastly, the Governor spoke of the ideas that Tokyo Metropolitan Government is implementing for building a sustainable society, such as turning Tokyo into a “City of Water”, as well as their efforts to prepare for natural disasters and terrorist attacks.

“Yesterday, I met with Mayor Bowser and we spoke about the visions that each of us have for our two cities. And while we will surely encounter bumps along the way through city diplomacy I hope to share Tokyo’s knowledge with many countries and people, and together, we will be well placed to overcome any obstacles.”

Link to the Center for Strategic and International Studies (CSIS):http://csis.org/event/tokyo-forefront( External link )