Speech at the Foreign Correspondents' Club of Japan, August 31st, 2016 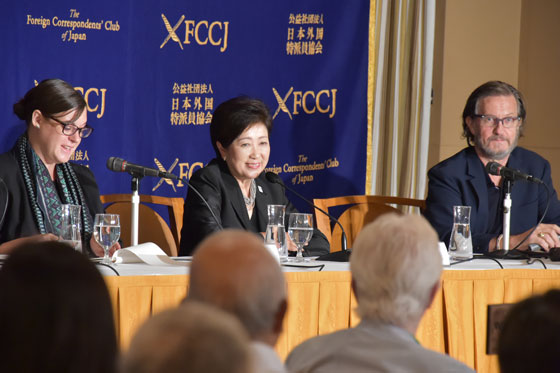 Governor Yuriko Koike spoke at the Foreign Correspondents' Club of Japan to outline her immediate and longer-term goals for the city. Her speech was centered around her plan to create a government "of Tokyo citizens, by Tokyo citizens, for Tokyo citizens".

Governor Koike spoke of her resolution to put the citizens of Tokyo first when it comes to policy making, and the importance of regaining public trust in the Tokyo Metropolitan Government after a string of recent issues.

"The trust of Tokyo citizens in their city government is essential in order to tackle all of the challenges that have steadily accumulated here. However, the city government has been losing that trust due to a recent succession of issues, unfortunately. Reform and greater transparency are what the citizens of Tokyo need most now, and I think that's why so many of them supported me."

The Governor outlined her government's four-year plan, containing policies aimed at addressing a number of urgent challenges before 2020 – a plan that she hopes to announce formally by the end of the year. Part of this plan is her vision to build what she described as "three new Tokyos".

"During my election campaign, I said that I wanted to create a new Tokyo that is three cities in one. I want Tokyo to be a 'safe city' for citizens and visitors alike, a 'diverse city' where everyone belongs, and a 'smart city' that drives future growth. These three new cities are important pillars of the new plan."

Lastly, Governor Koike turned her attention to the Tokyo 2020 Olympic and Paralympic Games and her resolution to provide "the ultimate stage for athletes and spectators". This included her aim of using the Games to promote the '3R initiative'.

"Since I was the Minister of the Environment, I have been promoting the 3R initiative - Reduce, Reuse, and Recycle. The 3R initiative was included in the official document of the G8 Gleneagles Summit held in England in 2005. In Japanese, these 3Rs can be summarized in one word – 'mottainai', which roughly means 'what a waste'. I want to make the 2020 Games a Games where the term 'mottainai' is known all around the world."

Please visit the following link to watch the video footage of the conference.