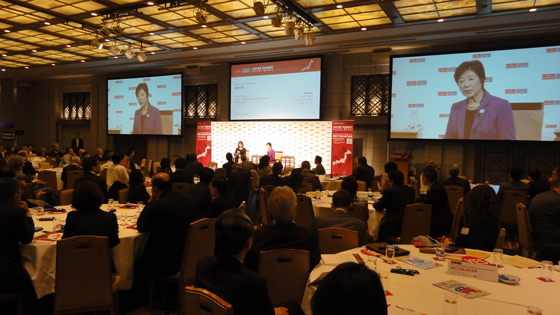 Japan Summit: Future Works was held on October 21st, 2016 to explore the coming changes in the world of work and to discuss how some of these changes might help re-boot Japan’s growth. Tokyo Governor Yuriko Koike sat down for the keynote interview with Sarah Birke from The Economist to discuss some of the challenges that she is facing in her new role.

Asked what concerns she has about the way Tokyo has been run until now, the Governor spoke of her desire to change the working system in Tokyo. Combined with her management skills, she highlighted the added value that she brings to the role by being able to look at issues from a woman’s perspective. Despite her election as the first ever female Governor of Tokyo, she says that participation from women in the political world is still very low. She believes that further participation from women in the workforce is vital as women bring new ideas which lead to further development for companies and industries.

“Only 9.5% of the House of Representatives are women, and that number has since decreased now that I have left. I believe that appointing women to decision-making positions is necessary for diversity in Japan. It is my hope that there will be improved participation from women in large companies too.”

Asked what her plans are for tackling issues which Tokyo faces, the Governor reiterated her desire to create a “safe city”, a “diverse city” and a “smart city”. She spoke about the fact that currently Japan’s rate of foreign direct investment is very low – and she expressed her intent to re-establish Tokyo as the financial hub of Asia. To assist with this, Tokyo already has financial initiatives in place such as the One-Stop Business Establishment Center, however the Governor is also placing an emphasis on attracting a highly-skilled workforce to Tokyo, something which she believes requires further initiatives such as increasing the number of international schools, and a greater focus on improving “life-work balance”.

“Longer working hours is a business model that was understandable during Japan’s high-growth periods, but it just isn’t viable anymore. In reality, you’re robbing people of the time they could be using to improve their skills, so I want to change the way people think about working over-time, and also the system itself.”

Governor Koike also spoke about the importance of implementing change at the top in order to see effective results. She believes that Japan’s traditional top-down culture and a lack of flexibility make it difficult for lower-level staff to make requests at work. The Tokyo Metropolitan Government is now promoting the “ikubosu” declaration which refers to superiors within the organization promising to recognize and understand the needs of employees, both male and female, who are required to provide childcare and nursing care at home. She wishes to implement this change at the management level, just as she did with her “Cool-Biz” initiative.

Governor Koike closed the one-on-one session by saying that in her role as governor she wanted to be seen as a modern pentathlon athlete, and stated that she has the passion to take on the big issues that Tokyo is facing.