Home > The Governor's Corner > Interviews/Speeches > Summary of Governor Koike’s Keynote Interview at the British Chamber of Commerce in Japan, April 6, 2017

Summary of Governor Koike’s Keynote Interview at the British Chamber of Commerce in Japan, April 6, 2017 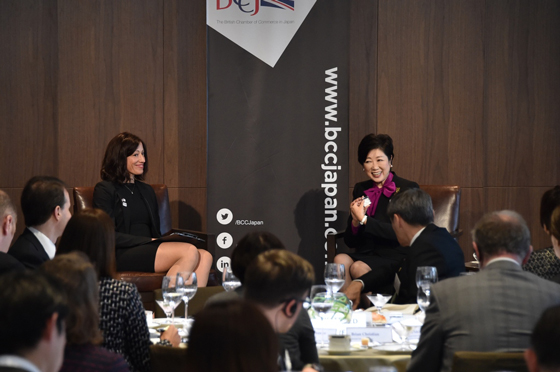 On April 6th, 2017, Governor Yuriko Koike was interviewed at the British Chamber of Commerce in Japan (BCCJ) on preparations for the upcoming Tokyo 2020 Olympic and Paralympic games, diversity, and life-work balance. The event was led by Emma Hickinbotham, the Executive Director of the BCCJ.

The governor began the discussion by focusing on her goals for the Tokyo 2020 Games,

“This will be the second time that the Olympic and Paralympic games will be held in Tokyo. The Tokyo Metropolitan Expressway and the bullet train are some of the legacies of the 1964 Olympics, and these became a catalyst for the recovery of Tokyo and Japan as a whole after the war. With Japanese society rapidly aging and the population of Tokyo set to peak in 2025, the 2020 Tokyo Olympic and Paralympic games are an opportunity to create a model legacy for how an advanced nation deals with the issues of an aging society.”

On the subject of accessibility and the Tokyo 2020 Paralympic Games, Governor Koike continued:

“The Tokyo 2020 games will not be successful without a successful Paralympics. The message that Tokyo should be sending to the rest of the world is that even with an aging society, citizens are still actively participating in society and enjoying sports. Accessibility is not only an issue for people with disabilities, but it is also a challenge as we strive to adapt to our growing elderly population —such as those who have developed difficulties walking, who may require a wheelchair, or who may have hearing problems. Creating an infrastructure that allows for greater accessibility in Tokyo is one legacy that the Tokyo 2020 games can leave behind.”

Moving on, the governor spoke on the importance of Life-Work Balance in Japan and in Japanese companies:

“The term ‘work-life balance’ has been used in Japan for the past 20 years, but the concept has yet to take hold. Given this, I think we should take the initiative and change this phrase to ‘Life-Work Balance’, as I believe that ‘life’ should come first. As governor of Tokyo, I think it’s important for this movement to begin from the metropolitan government, and I’ve instructed all metropolitan government employees to leave the office by 8pm at the latest. I think we’re beginning to gradually see real change based on this.”

When asked about the legacy that she would like to leave as Governor of Tokyo, Governor Koike remarked, “First and foremost, I want to ensure the success of the Tokyo 2020 Olympic and Paralympic Games. In addition to this, I aim to build an administration that is transparent and wins the confidence and trust of the citizens of Tokyo. I want to focus on achieving this goal.”

At the end of the session, Governor Koike mentioned the Tokyo 2020 Medal Project. 5,000 medals – gold, silver, and bronze – are needed for the Olympic and Paralympic games, and Governor Koike encouraged members of the audience to bring their used cell phones and other electronic devices to the Tokyo Metropolitan Government office in Shinjuku to be recycled to produce the medals.