Home > The Governor's Corner > Interviews/Speeches > Speech at the Bloomberg-hosted Event on May 10th, 2017

Speech at the Bloomberg-hosted Event on May 10th, 2017 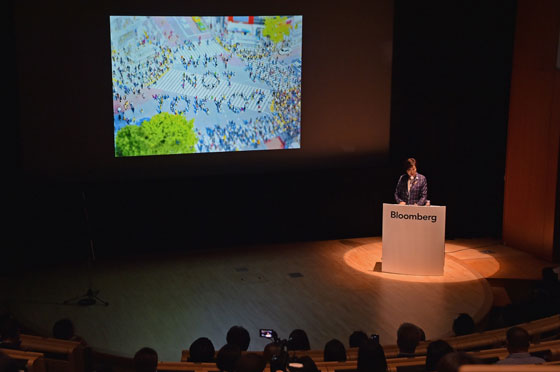 On May 10th, 2017, Tokyo Governor Yuriko Koike presented the keynote speech for a special Bloomberg event focusing on diversity and work style reform. The event was held at the National Museum of Emerging Science and Innovation (Miraikan) in Tokyo.

The governor began her address, titled, "A Roadmap for a New Tokyo: Inviting Diversity and Individuality," by referring to one of the main themes – 'Working in Your Own Way' – and told the audience that she believed that "people should have the opportunity to explore a multifaceted career."

The governor also discussed her administration's aim to create a New Tokyo, a sustainable and truly global capital city that is three cities in one. Governor Koike described these as:

"-- a Safe City, where people feel more secure, more at ease and can live more vibrant lives.
--a Diverse City, where everyone can lead fulfilling lives and actively participate in society.
-- a Smart City that is open to the world and is a leader in the fields of the environment, international finance, and business."

Focusing on diversity, Governor Koike discussed the importance of the active participation of women in society, and explained how the Tokyo Metropolitan Government is supporting this initiative:

"To help empower female workers going forward, we must take steps to make it easier for women to work. For example, to eliminate waiting lists for access to childcare, the Tokyo government has implemented a plan to add 70,000 childcare spaces by March, 2020 […] Through these efforts, we are working to create a city in which women and men can have and raise children with peace of mind."

Additionally, the governor discussed the need for both men and women to establish a "life-work" balance. Governor Koike argued that this could be achieved through work style reform and changing public awareness.

In addition, Governor Koike described how the Tokyo government is working to ensure that Tokyo is pleasant and accessible for all people, from all walks of life:

"To realize real diversity, we must work to make Tokyo a city that is pleasant, easy to live in and easy to visit, not just for women, but for all people, including foreigners, the elderly, and people with disabilities." The governor said that the Olympic and Paralympic Games will provide Tokyo an opportunity to change and to create a positive and lasting legacy. Furthermore, the Tokyo Metropolitan Government and Tokyo 2020 Organizing Committee are working together to recycle old cell phones and other small electronic devices into the medals to be used at the Tokyo 2020 Games:

"Our aim is to produce 5,000 medals through what we call the "urban mine". We hope this will foster a sense of unity among citizens of Tokyo and visitors to the city, who will have a chance to come together to contribute to the Tokyo games."