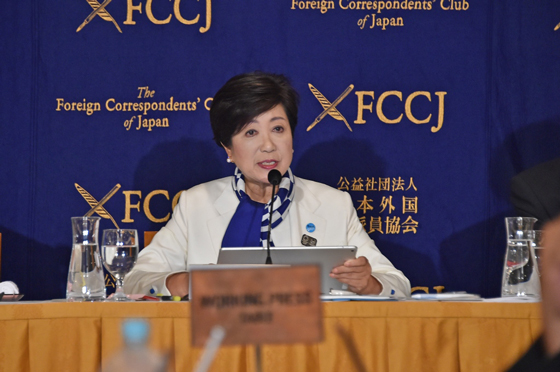 Governor Koike participated in a press conference at the Foreign Correspondents’ Club of Japan (FCCJ) on August 3rd, 2017.

During the conference, the governor reviewed a number of initiatives she has implemented since her tenure as governor began in August, 2016. These include increasing the city’s potential, inviting foreign businesses, and striving to turn Tokyo into a more sustainable society through environmental programs and more.

“I spent my inaugural year planting the seeds of change. This coming year, I believe we will see those seeds sprout and begin to grow,” the governor stated.

“I have worked to enact a grand reform of Tokyo by putting Tokyo citizens first and increasing information disclosure and government transparency, as well as through the concept of ‘Wise Spending,’” she added.

The governor reiterated her goal of creating a “New Tokyo” that is three cities in one: A Safe City, a Diversity, or Diverse City and a Smart City.

Speaking on Safe City initiatives, Governor Koike focused on efforts to remove utility poles around the city: “In June this year, the Tokyo Metropolitan Assembly passed a bill that would make us the first prefecture in Japan to begin efforts to eliminate utility poles,” she said. “These poles could potentially fall and block roads during earthquakes. Removing them would not only make the city more beautiful, but, importantly, it would also increase its disaster preparations.”

On diversity, Governor Koike said that Tokyo will be a city “in which everyone – men, women, children, seniors, people with disabilities, members of the international community and the LGBT community – can realize their potential and lead more fulfilled lives.” As an example of Tokyo’s diversity initiatives, the governor spoke about the new nursery school at the Tokyo Metropolitan Government Building which helps women to continue their careers after childbirth.

Tokyo’s “Smart City” programs include an incandescent-to-LED light bulb exchange campaign, a growing fleet of hydrogen-fuelled city busses, and city-issued Green Bonds to advance ESG investing. She also argued that Tokyo should focus more on FinTech and the Internet of Things to bolster economic growth and create a more vibrant living and working environment to make Tokyo even more attractive to business and talent from overseas.

Governor Koike also spoke on the importance of creating a business-friendly environment for international companies through services such as the One-Stop Business Establishment Center in Akasaka. The center “help[s] startup companies and international businesses achieve their goals in Japan,” she said, and noted that additional branches are in the works.

In conclusion, the governor stated that she hopes the 2020 Games will leave their own unique legacy that will usher in a culture of kindness and consideration throughout the city, in the same way that the 1964 Tokyo Games left positive advancements like the bullet train and the Metropolitan Expressway in their wake.

The entire conference and Q&A session can be viewed on the FCCJ’s YouTube channel: