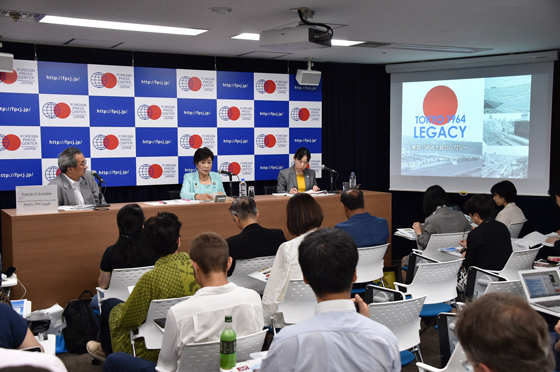 Governor Koike gave a press briefing to members of the international media at the Foreign Press Center Japan on July 23, 2018 － two years before the opening of the Olympic and Paralympic Games Tokyo 2020. She spoke on initiatives the city is taking in anticipation of the Games, and highlighted “the legacy this momentous event will leave for future generations.” 33 journalists were in attendance, representing countries around Asia, Europe, and North America.

The Governor first elucidated plans to establish a “New Tokyo” that is “three cities in one” - a ‘Safe City,’ a ‘Diverse City,’ and a ‘Smart City’” - as part of the “grand reform of Tokyo” she has pursued since taking office in 2016.

Amid Japan’s population decline and further advancement into a “super-aged society,” Governor Koike reaffirmed her commitment to the sustainable growth of Tokyo. She emphasized that people are key to achieving this goal and that she is pushing policies to enable individuals to participate actively in society and live to their full potential.

Then, Governor Koike announced that this year marks the 150th anniversary of the city’s renaming from the former Edo to Tokyo. Looking back on Tokyo’s history and forward to the city’s future, she focused on the legacy of Tokyo’s first Games in 1964 and the coming legacy of the 2020 Games. Regarding the 2020 Games, she said, “I believe they will serve as a springboard to further progress towards a sustainable city where all citizens can truly shine.” She also indicated that these Games will be “an Olympics and Paralympics of Recovery,” showcasing the great strides Japan’s disaster-stricken regions are making towards full restoration.

Governor Koike stressed that the 2020 Games cannot triumph without the success of the Paralympics. Among other work, she explained the “Team Beyond” project intended to support para-sports.

Governor Koike explained several projects to make the Games an event people can participate in and feel a sense of ownership over. She said that the city plans to call for up to 110,000 volunteers in the hopes of instilling a culture of volunteerism in Tokyo beyond the Games.

In addition, Ms. Koike highlighted the Tokyo 2020 Medal Project to craft Olympic athletes’ medals from materials ‘mined’ from recycled electronic devices, and further encouraged public participation by reminding the audience of the collection box installed at the briefing venue.

The Governor took the opportunity to introduce the newly-named mascots for the 2020 Games, which were chosen by a poll of elementary school children across the country.

Governor Koike also mentioned a passive smoking prevention ordinance approved by the Tokyo Metropolitan Assembly this June - part of Tokyo’s efforts to take appropriate measures as the 2020 host city, in accordance with the “Tobacco-free Games” promoted by the WHO and the IOC.

As part of plans to ensure an enduring cultural legacy beyond 2020, Ms. Koike announced that Tokyo will host cultural events under the Tokyo Tokyo Festival program, along with the Tandem Paris-Tokyo cultural exchange program taking place  in 2018.

Governor Koike also stressed Tokyo’s goal in becoming an environmental leader and stated that the Games will be an opportunity to “showcase a modern sustainable city to the world,” giving the Olympic and Paralympic Village, which will be powered by hydrogen after the Games, as an example.

Further, the Governor cited the growing focus on Sustainable Development Goals and ESG, adding that Tokyo is working to foster more ESG investment, such as with this year’s Tokyo Financial Award program.

The Tokyo Forum for Clean City & Clear Sky, held in May, secured signatures from 22 cities worldwide for the Tokyo Declaration for sustainable urban environments, she announced, and affirmed Tokyo’s commitment to reducing consumption of single-use plastics and preventing marine litter.

In conclusion, the Governor expressed her hopes that the Games “will allow athletes to break records, while creating wonderful memories for the people of Tokyo, Japan and the world over, and leave an indelible and lasting legacy.”